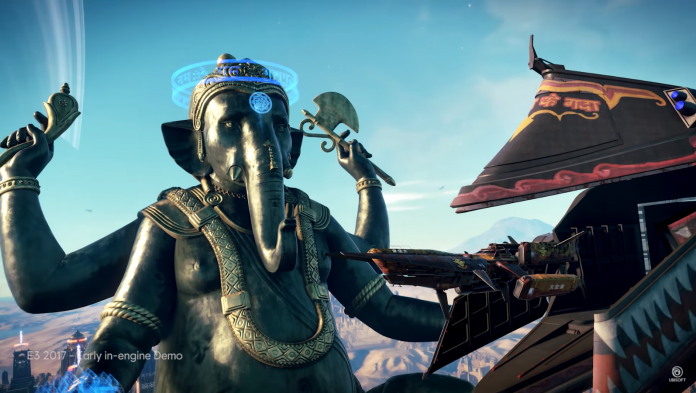 Ubisoft uploaded a trailer today that showcases the new engine for the long-awaited sequel to a beloved game, Beyond Good and Evil 2. In the trailer Creative Director Michel Ancel walks us through a thoroughly detailed video of the in-engine demonstration. This new engine has been roughly built from the ground up, and it’s based loosely on the UbiArt Framework, which was used in games such as Rayman Origins, Rayman Legends, and Child of Light.

The trailer starts off with a giant ship hovering above a city in front of a big elephant statue, like the one seen in the E3 trailer. Ancel says that this big ship is your “home”, as this is where your crew members will be stationed and all of your important goodies will be stored. He then deploys a smaller ship from the front of the big ship, which is pretty cool of and in itself. Then, the monkey dude with an attitude also from the E3 trailer hops out of the pilot seat and is controlled directly. While he was the main character for this trailer, Ancel stated that you’ll be able to create your own hero to play as.

One thing we kept hearing Ancel mention was the “feeling of scale” and how Beyond Good and Evil 2 will go out of its way to represent it. And boy did he really mean it. The second you see the monkey climb out of the smaller ship and jetpack over to the bigger ship, it suddenly seems much, much larger than it was when he was piloting it. They’re really going to a grand adventure with how much you’ll be able to explore in this game.

At the 5:20 mark is when our minds were really blown. Using developer tools, Ancel zooms the camera out far enough so that it’s in space. Not only that, he zooms out to the point where we can see other planets in the galaxy. The fact that this is all rendered in real-time makes it all the more impressive, and we can’t wait to see what else this engine can do.

We’re then treated to a demonstration of how the space ships control. You have full control over the ship’s speed, which is necessary as you’ll need to be able to go fast enough to break atmosphere. As the ship reaches hyper speed, it’ll be going as fast as 20,000 KM/H, and once Ancel enters space it’s absolutely breathtaking.

If this wasn’t enough to get you going, Ancel then demonstrates the real-time terraforming the engine is capable of. After he flies over a distant planet, the engine simulates a giant meteor impact, and we get to see the giant shockwave that travels across the planet. We’re really excited about what this could mean for story-related aspects. Can whole cities get wiped out in the blink of an eye? What if you hadn’t been there yet? What will happen?!

While this all seems way too good to be true, we’re confident in Ancel and the creative team behind the game. It’s been far too long and just the fact that we’re actually getting a sequel to Beyond Good and Evil is awesome alone, but this super powerful engine is the icing on the cake.