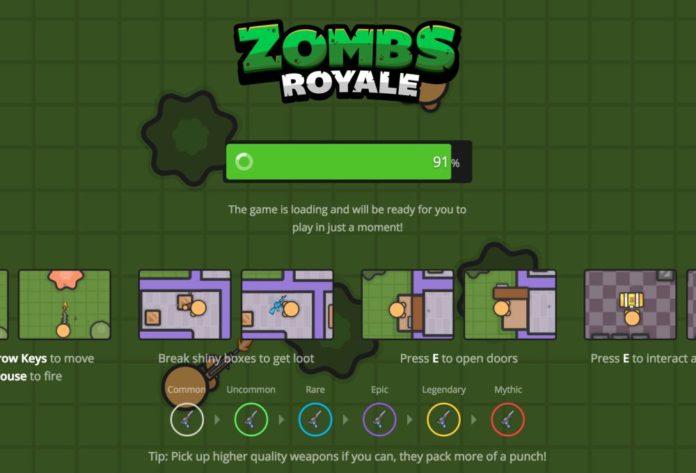 Let’s kick this off with a revelation: There are no zombies in ZombsRoyale.io. Yes, the name suggests that this is another undead swarmer, but honestly, it’s more like a hundred other players vying for the top spot in a map that closes in with every round. No flesh-hungry, re-animated corpses in sight.

This game is a battle royal of found weapons and quick kills, with the objective to be the last survivor. Why? Because the game makers are twisted, creative minds in the best ways, and they don’t need a reason to want to see gamers slaughter each other for bragging rights.

In this game, the best player is the one that either gets lucky, or strategically, expertly butchers their fair share of over 100 players in a single round. In this instance, the old adage of practice makes perfect is somewhat correct, but plain, simple good luck plays a part somewhere too.

Some need-to-know details about ZombsRoyale.io include:

– This game is a multi-player in real-time, which means you are playing against real gamers from around the world, and each one thinks they can outwit the other.

– There are three modes: solo, duo, and squad. The solo mode is self-explanatory, but duo and squad mean you can invite your friends to join you for a standoff against other players. When the dust settles, the one with the most kills is crowned the best.

– ZombsRoyale.io is constantly under construction, but not in a disrupt-your-game way. The developers are always trying to make it better, so check out the recent updates page when you first log on.

– You can save your progress by logging in via Google, Facebook, or as a new, unique username. This is also how you climb to the top of the leaderboards.

ZombsRoyale.io is frustrating in your relentless pursuit for dominance in an all-out kill-or-be-killed world. However, the feeling of exhilaration that you get when you blow down a row of enemies puts you on cloud nine. That said, it takes a while to get there, because dozens of gamers have been playing this game for a lot longer than you have. 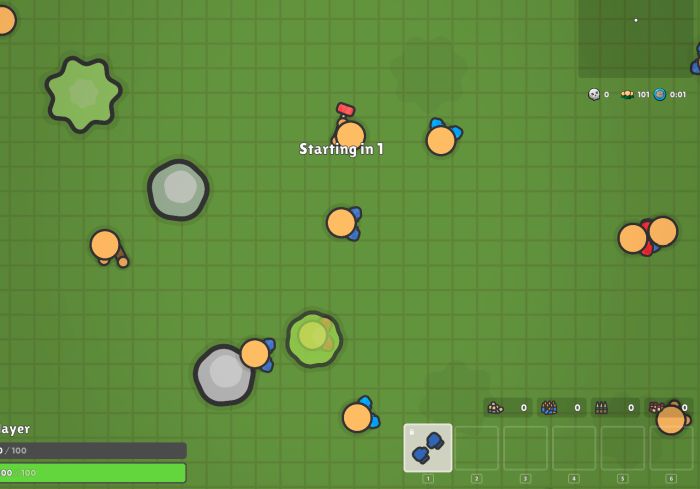 When you start a new game, your character blows in from the skies on a parachute, which you can steer to what you think would be a good beginning point in the map. When you land, you’ll immediately see weapons everywhere, lots of bushes, shiny boxes, and a few buildings. You might even notice the map is crawling with other players, some of whom are already equipped with their kill weapons. Run. Hide. Or, pick up a weapon and lay waste to the swarms of battlers.

The game is hard to master at first because you have to constantly watch your own back to make sure you don’t get bombarded, but once you get the controls down, it’s all about your own skill and marksmanship.

Move your character forwards, backwards, and side to side with the arrow keys or WASD on the keyboard. The right mouse button is how you aim, shoot, and wage war on your opponents. Press E to open doors, open boxes to snag loot, or pick up/drop weapons. Got it?

If you can, hide behind a bush and practice your moves before you hop into the proverbial fire. Side note: Each player is equipped with colorful boxing gloves at the beginning of the game. These are for close-combat melees that can be effective when weapons or hiding aren’t options.

Because bullet points give you the gist in a cool, quick-read way, here are a few more need-to-know details about ZombsRoyale.io gameplay:

– The game starts with over 100 players, and your mission is to outlast all the others. When you die, if you die, the game will show your rank out of the 100+ gamers that were killed before you.

– When the player numbers drop below 50, you’ll notice a blue gas creeping around the edges of the screen. Eventually, as more players are killed, the blue gas closes in, pushing the war to the center of the screen. Touch the gas at all and you’re dead.

– If you are logged in, your score builds up over time, which can earn you free rewards and level ups. Each level up brings new, higher-grade weapons, such as high-powered grenades, mini machine guns, and close-range shotguns—all of which do more damage than the usual sniper rifles and pistols.

– There are new challenges to complete on ZombsRoyale.io on a daily basis. The challenges range from super-easy to SUPER difficult, like win one round, or get 3 pistol kills in under a minute. Sometimes the daily challenges change every 4 hours or so. Sometimes they stay the same throughout the day. It really depends on how sadistic the developers are feeling that day.

– The same airplane that drops you to the ground at the start will circle back occasionally and drop boxes of ammo and new weapons. For many players, this is a chance to scramble to get what they can. But you can pick off other gamers with your own weapons by planning an ambush when the boxes drop from the skies.

As aforementioned, there are some aspects of this game that can be annoying, to say the least. While ZombsRoyale.io is fun in many ways, the lag can be a killer. Literally. Your screen can lock up because of how many players are on board—and, before you know it, you’re dead because your computer couldn’t keep up. While there are always people playing this game somewhere in the world, you’ll learn when the best times to play are; those times when your computer isn’t so challenged by the sheer number of fellow gamers.

What Have We Learned Here?

ZombsRoyale.io is a multiplayer, real-time massacre; one that can be over in minutes, depending on how determined and bloodthirsty the players are. Gamers that enjoy the 2D arcade style and senseless slaughter of unknown opponents will love this game. Those that prefer a calm game that won’t drive up their blood pressure should probably steer clear.