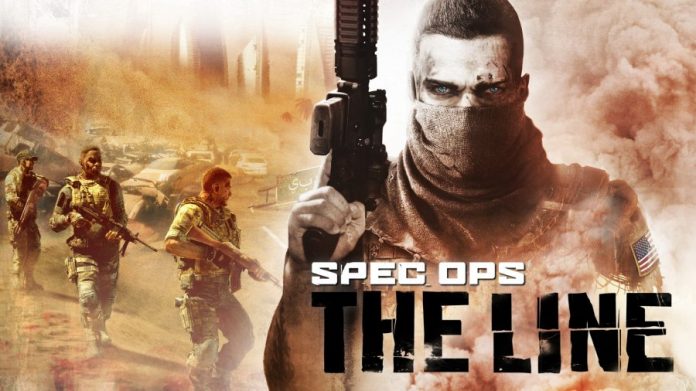 Spec Ops: The Line appears, at first glance, to be nothing more than an exercise in simple, base ‘genericism’. Even the name is as generic as one could hope for! It features a team of three generic American soldiers, two of whom generically argue like an old married couple preparing themselves for the ending of the long war of attrition which has been the guiding force behind their relationship. The third is the player character, one whom entered the competition for most generic man of the year, but lost out to Master Chief and that bloke from Alpha Protocol. Set in Dubai, a sand-storm of biblical proportions hit the city and the force of American soldiers sent in to provide relief have long-since lost contact. Your team are sent in to re-establish contact and, unsurprisingly, sand hits the chopper blades. Spoilers! That is both a metaphor, and an actual event in the game.

I assumed when I first began the title that some of the comparison’s I had heard, which focused around Spec Ops being similar to a modern day Heart of Darkness, were either made with a great degree of sarcasm or by people whom had never read Heart of Darkness and simply wanted to appear relatively well read. By the end of it, I was never more certain of a comparison between literature and interactive media being wholly accurate.

In the guise of a generic third-person-shooter, clearly emerging from the same ‘mechanical’ school as Gears Of War and Rainbow Six, Spec Ops: The Line, (Get it? Because there’s sand involved?), leads you along on a narrative which actually becomes engaging. You are driven through cover-based fire-fights and the now obligatory turret sections of both ground-based and airborne variety with an almost torturous mediocrity. The narrative contains all the generic content as you could hope for, including ‘moral’ choices, in fact, all it requires is for one of your NPC’s to be cloned, and you have to decide which one is the real NPC.

The only improvement on the completely bog-standard gameplay is the use of sand as a weapon. It is one of the few mechanics in gaming that is actually relevant to the narrative in a bigger way than, say, Jensen’s robotic attachments in Deus Ex. Despite the fact that each and every use of the mechanic appears scripted, I am impressed that the developers introduced such a simple aspect of gameplay, whilst still offering relativity to the previously established narrative.

You never quite know, throughout the entire narrative, when Mr. Generic Runner-up went insane. Was it before you even loaded the game, and he has made up his entire mission? Was it when he saw the horrified, burnt-out bodies he had caused after using White Phosphorus? Was it when the bodies hanging from the bridge swayed gently in the breeze? Or was it when the chopper hit the floor, and he designed the entire following narrative within the shattered remnant of his own psyche?

This game is one of the few that shows the horror of what you actually do in titles like Call of Duty. In those games were an enemy simply hits the floor and his gone, Spec Ops shows the burnt-out corpses you leave behind. It shows you the dangers of Hero-Worship in a way that I actually haven’t seen since Kurtz in Conrad’s Heart of Darkness. It is hardly subtle, but even the name of this elusive Colonel, John Konrad, shows the link between the two, one which, it is clear, that the Developers of the title had in mind.

Even the ending, or rather the epilogue, is little more than a parody of the few choices offered throughout the narrative. It appears that, despite those actions you perpetrate within the title, they completely fail to alter the over-arching story as a whole. By the end, it almost feels… wrong, that you can actually alter an aspect of the title.

Spec Ops: The Line is an incredibly well-written text, but it is written in such a way that its intelligence is hidden behind an overly-generic gameplay structure, and even the narrative could simply be taken as a standard example of modern media. Perhaps, once again, I am reading too much into it, but hiding such an amazing narrative within such a title appears to be a work of genius, and takes a greater understanding of video game narrative than almost any example I can think of. It simultaneously appeals to the mass audience of Gaming, whilst offering those who read too much into this format enough material to think we are clever for pointing it out.