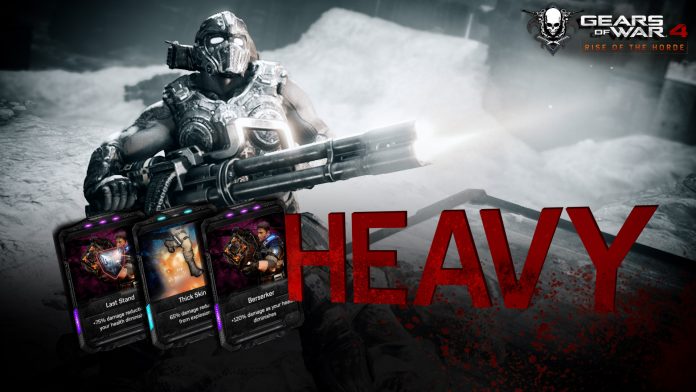 A new free update is coming for Gears of War 4 for both Xbox One and Windows 10. Appropriately titled Rise of the Horde, this update will expand on the series’ famous Horde Mode, where you and a bunch of friends bunker down and attempt to hold out against a seemingly never-ending horde of the dreaded Locust Horde.

In this update, brand new skills are coming to Horde Mode. The Engineer class can repair fortifications easier, and enemies killed by their sentries have a higher chance to drop more ammo. The Heavy can now be more resistant to explosions and you can go out in style in two different ways – Berserker increases your damage while your health is low, while Last Stand increases your defense.

The Scout got a bunch of cool new roadie run skills. Dodge makes them take reduced damaged while roadie running and Speed Loader will automatically reload your weapon with Active Reload rounds upon roadie running. Staying still in cover will activate your cloak, making you harder to detect. The Sniper can steady their aim further while scoping, and their sniper bullets can now penetrate enemies! Called Shot lets them mark enemies to decrease their defense against all weapons.

Finally, the Soldier can absorb more power from enemies killed by grenades. Resupply lets them automatically regenerate grenades over time, and their have increased accuracy with assault rifles. Which of these new skills are you the most excited for?

For those who haven’t tried out Gears of War 4 yet, good news – from June 9th to the 15th, Gears of War 4 will have a trial edition available for download for both Windows 10 and Xbox One! The trial edition grants you 10 hours of play. You have access to the first act of the campaign and full access to the Horde and Versus modes, which means you can try out all the new stuff in Rise of the Horde! Even better – if you’re a new player, there are special Trainee Packs you can obtain upon leveling up. These packs contain horde skills, bounties, and weapon skins. The later packs might even have new playable characters in them!

This update also comes with two new difficulty settings. The Inconceivable setting is even harder than the Insane setting! You’ll need to be on your top game to survive this grueling difficulty. Before you can try it though, you’ll need to survive 50 consecutive waves to unlock it. The second difficulty setting is Ironman. Roguelike fans are probably familiar with this term. In Ironman, getting killed means game over – and that’s that!

Finally, there are two new maps coming. Avalanche is a returning map from Gears of War 2. Set in a snow mountain side resort, you’ll need to watch out for avalanches in addition to your enemies! The second map is another returning map, this time from Gears of War 3. Rust Lung features cover that can be raised and lowered by the push of a button.

The Rise of the Horde update launches on June 6th.