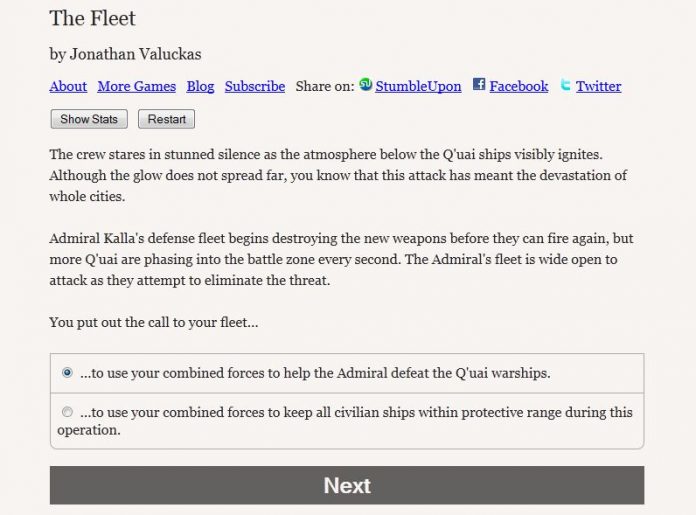 A long time ago I told you about an amazing interactive novel: Choice of the Dragon. Today, I am really happy to announce that the developers of the interactive novel, Choice of Games, have released a similarly amazing title, The Fleet.

This interactive novel is a multiple-choice text based game (no graphics here, folks!) that manages to bring the same excitement and entertainment as a full fledged indie sci fi title! And, at the same time, helps you get some quality reading on your side – which is something you’re probably in a big need of!

Take back your home world from alien invaders! Forge an Intergalactic Alliance (with untrustworthy allies) to reclaim your planet; blast your way to victory with an ever-expanding arsenal. Will you sacrifice civilian lives to exact vengeance on your enemies?

For example, in deep space, you’ll encounter an enemy base, where alien military scientists are building weaponized AI drone ships, in violation of intergalactic treaties. But the aliens are stationed there with workers and their families; if you attack civilians unilaterally, it will jeopardize your reputation with the nascent Intergalactic Alliance. What will you do?

The Fleet puts you in front of such decision and each of them will have its pro’s and con’s. So just follow your heart, do what you think is best and see in the end how you did. Check out The Fleet here and have fun playing it!