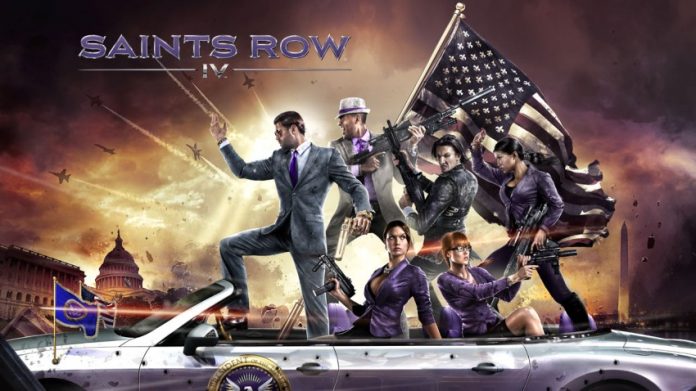 It’s no lie but Saints Row the Third was just an absolute treat to gamers who played the game and fans of the Saints Row series. It was an all-around good time fun in Steelport. And playing Saints Row IV still has the wide variety of customization, the all-around good time fun feel, and crazy- cool story and side missions. But and this time around the game features you with cool “super powers”. YES, that’s right, you heard it folks – “super powers” are now featured  in the game. Please read on fellow gamers.

Now just like how the last game started, Saint Row IV (SRIV) starts off with a bang, with its wide-wacky playable intro. But instead of robbing a bank you are taking down terrorists. And not to worry, the same crude-silly packed humour is still there too. And most of the characters that were in the 3rd game are here and new characters are also introduced into the game as well. You’ll start playing as the customizable Saints leader known as “Boss”. Within the first 20 minutes of playing the game you will have taken down a “nuclear missile” which plays Aerosmith’s “I don’t wanna miss a thing” as you are taking the missile down, become the United States President, and then battle an Alien Invasion that is led by a crazy-British accent speaking Alien. Yeah no battling gangs, for reputation this time round. Sure, playing the first 20 minutes of the game sounds crazy impossible, but the good folks at Volition did a good job at blending all of the silly craziness that the franchise is known for and into the game, and the best part is that it actually works well. 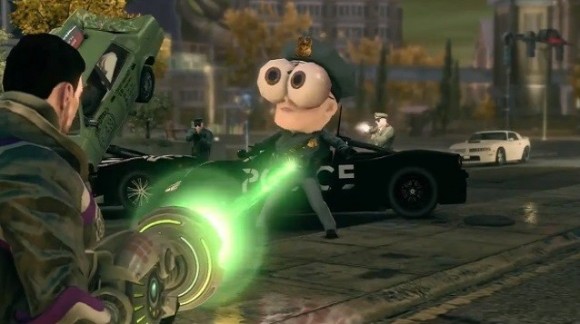 And just when you think that the game couldn’t get any crazier… you thought wrong. Because after all the craziness you went through, you are transported in to a Matrix-like recreated city of Steelport. And this is where the real game begins, because not only are you in a Matrix-like city of Steelport but get an introduction of the cool unique “super-powers”. The first few powers that will be introduced to you are the Super leap and glide. Its cool how you leap as high as you can go then slowly glide in the air getting a nice view of the city. And I love the “Dash” power, the power that lets you run at high speeds. It feels like you are playing as DC’s The Flash or Marvel’s Quicksilver. Now there are more super-powers in the game, and I’m just itching to tell you what they are but I don’t want to spoil it for you.

The gameplay for Saint Row IV plays pretty much like the last game, there is no huge difference. The gun mechanics are still the same, just aim and shoot. But I love the fact that the guns in this game have gotten crazier too, with a nice customization that seems a bit fresh. Players can now go into the Friendly Fire store and upgrade their guns’ firepower, ammo etc. But this time around you can change how the gun functions to a degree. You can also change you gun skin to suite your style. The game introduces a special gun, which is called the “Dubstep gun”. I would love to tell you but I’m sure you have seen the YouTube video of this gun’s function. So I won’t get into details. But I will say this; it is a funky gun. As for driving its still plays the same. But with that cool “Dash” power that make you run a high speeds who needs a car to drive around?

The graphics in SR3 no doubt were a huge upgrade from SR2. This time around the graphics are more of the same, no huge upgrade or anything, but the characters and level design do seem to be a bit more polished. The city of Steelport pretty much looks the same in terms of scale and design. I would have loved it if the city was a bit bigger than the last game though. The music in SRIV is amazingly great. I love the fact that there is a nice variety of music coming from the different stations that you choose from, and whatever station you choose they all feature great tracks and there is music from most genres to select from. Track such as Biz Markie “Just a Friend and even Stan Bush “The touch” from the 1985’s Transformers the movie. Just to name a few. 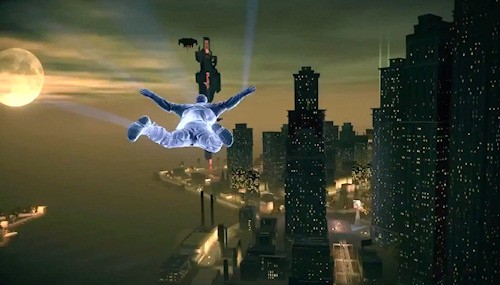 Without a shadow of a doubt, but having powers make you feel like you are almost a “God” in this game I said almost. Nothing and no one will challenge you, to sum it up you are a super hero, with no challenges. This may be a minor downfall just do to the fact that the “super-powers” seem to almost over shadow the game such as the gun combat and driving, I mean going around the city and causing mayhem in super hero style is fun no doubt, but it tends to lose its touch, or in other words it gets stale after a while. But SRIV does have great and unique story missions to play through and great side missions to complete to get away from the story for a while. And not to mention that there are trophies to achieve, guns to upgrade, cars to customize, unlockables to unlock, and challenges to conquer. There is plenty, and I do mean plenty to do in SRIV to keep you busy for a while if even if you do get bored playing super-hero.

Overall SRIV is a great game to play. And the addition of having super-powers is a huge bonus. Besides the great tracks to listen to, and the amount of stuff to do in the game, Saints Row IV is a game that lets you have endless fun. I did my best not to give many spoilers that’s because this is a game that you should buy and try out it is worth every dollar. So go ahead and pick this one up, and just have a good time.