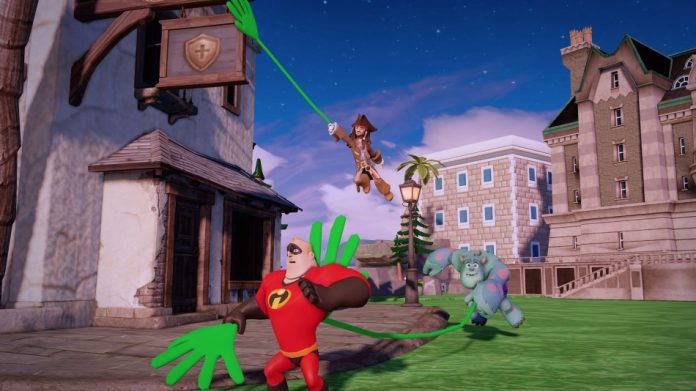 Disney games such as Castle of Illusion Starring Mickey Mouse, Aladdin, and the Kingdom Hearts series have one thing in common… they all have magic. And Disney Infinity truly has the famous panted Disney magic. Read on fellow gamers

Now back in 2002 Square Enix (formerly Square) released Kingdom Hearts for the ps2. It worked so well not only did it have characters from the Final Fantasy series, but it had famous Disney characters that we all know and love.  11 years later game developers Avalanche Software created this game that only has Disney characters. Characters such as from Monsters Inc., The Incredibles, Toy story, the list goes on and on. Disney Infinity is an action, adventure open world game. This game is just fully jam-packed with a variety   of open world creation, and a very creative story driven gameplay. Playing this game just brings out the inner kid in you and you just can’t help but smile… big.

The game is divided into two modes; “Toy box mode”, this mode allows the player to create their own world, and adventure.  What is great about this mode you and mix and match everything (considering those are unlocked) within each of the play sets including characters, weapons and gadgets. And with new content that is unlocked you can build whatever your creative mind desires, this mode is almost similar to that of LittleBigPlanet. And there’s “Play set mode” this mode is similar to that of campaign. The play set is only exclusive to that of the theme, and only characters of that theme can only be played. Take for instance if you are playing the Toy Story play set don’t expect see Captain Jack, or Mr. Incredible playing alongside with you. 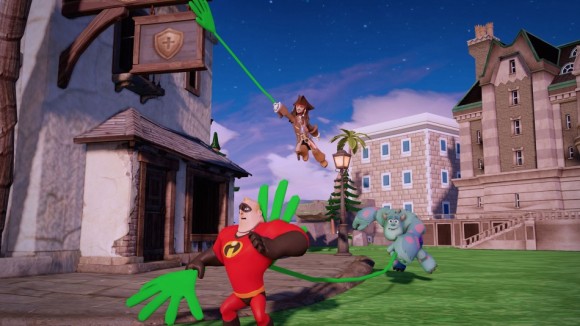 The game really comes to life when the characters are transported into the game with the use of Infinity Base that plugs directly into your console. You place the well-crafted toy statues on the Infinity base and you watch the Disney magic take place. Each toy has their own unique style, flair, and personality. And as you watch them come to life in the game it’s… magical.

Jack Sparrow, Sully, and Mr. Incredible are available in a starter pack. And also confirmed Mickey Mouse will be an additional character. Mickey makes an appearance in the game as he welcomes you. Now this is a Disney game right? So my question is how come classic characters such Donald, Goofy, Minnie, or even Chip and Dale are not even playable in this game? It really would have been nice to have those classic characters in the game. Maybe, hopefully they will come in a “classics pack” or something; I’m keeping my fingers crossed. Each play set is different and unique. Now take for instance Pirates of the Caribbean. This play set is a swashbuckling adventure, with great problem solving and good old hack and slash combat. Now as I mentioned before everything that you unlock will go straight to your Toy box mode. And not only do you create your own world but you can create your game too. I found myself playing this wonderful mode for hours. It truly is fun and addicting and with more and more stuff you unlock the possibilities are just endless.

Now playing the Toy box mode is great but building things like large scale buildings is a tad frustrating at times, things don’t snap into place you have to fiddle around until it snaps into place, this can be time consuming.  Now unlike the freedom you have to build at will like LittleBigPlanet. Toy box mode requires you to have blue print plan in your head, because if you don’t know or have an idea on what to build, you’ll soon notice that  blocks that cannot conflict with one another, cannot be placed, and certain pieces of terrain can’t be overlapped. And another thing is “where is the undo button?” I mean it is really easy to delete things, how come they couldn’t add an undo button?

Now getting back to the “Playset mode” it can be played solo or with a friend via co-op. Co-op comes at an added cost whether you buy one figure or a package of 3 at a discount. It would have been nice to play co-op locally without the additional payment of getting another toy though. If you want to play alone or with a friend is up to you like Toy Box mode the Playset is fun and addicting to play. Each of the Play sets offer hours of play, more so if you complete all side mission and all challenges. There is always something to do. Believe me the starter pack will keep you busy in this game for a while.

My only two minor problems I have with this game are the fiddling controls with Toy Box mode, and the lack of classic characters. But Overall Disney Infinity is great game to play, the two mode offer hours of gameplay for you to enjoy or with a friend via playset mode. It is beautiful and rich with different Disney Characters ,and themes.  Playing Disney Infinity was not only magical but it was an” Infinity and Beyond” gaming experience it has left a lasting impression on me.