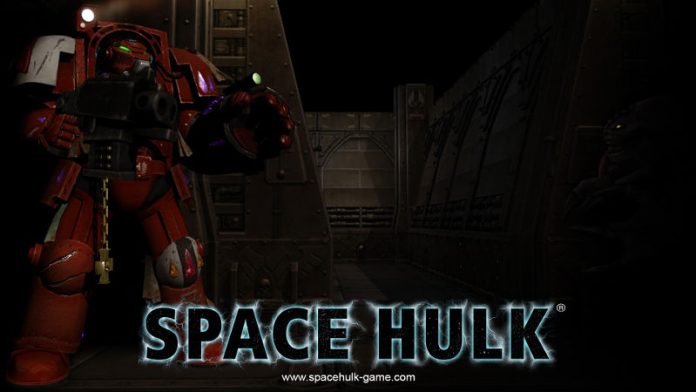 “Acceptable losses,” is the mantra of Space Hulk. It’s not a game where you can sail through with all troops intact. Troops will die, but it’s your job to ensure that that they die well.

Space Hulk is essentially a port of the original board game, keeping the same turn based combat intact. Each mission (Taken direct from the board game) starts with an overview of the map,  giving you the opportunity to figure out your path and key choke points.

From there, you get to select which order your Terminator soldiers will spawn in. There are five classes; all-purpose Storm Bolters, melee specialised Sergeants, the AoE Flamer unit, the range specialist Autocannon and the utility based Librarian.

The order you spawn these troops in is vitally important, as once the game begins proper and you move out through the ship, the tight corridors make it incredibly difficult to rearrange yourself, at least not without wasting a host of action points. 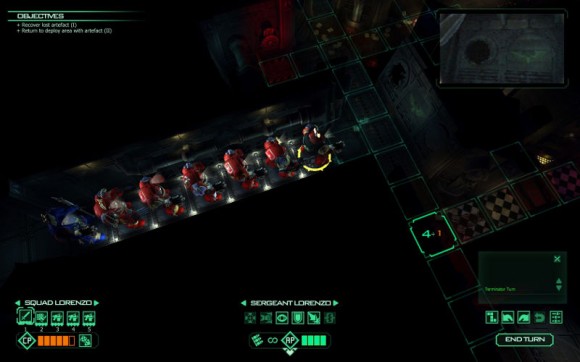 These AP are the central component of the game. Each Terminator starts the turn with four, and they’re expended through combat, as well as by plodding through the Space Hulk.

Plodding is without a doubt the word; Terminators are incredibly cumbersome, great clunking footsteps driving home their weight. Each tile moved burns one AP, and they also lose one point each time they turn 90 degrees.

In a pinch, a backup supply of movement points called CP be accessed can be used to add a few more tiles of movement or get off a few more shots, but even then, the Terminators don’t move anywhere in a hurry.

As you move (Slowly) outwards from your initial spawn, much faster Genestealers move around the ship. They have 6 AP to your 4, so they will always outflank you.

At the start of the game, they pour in from designated locations at the edge of the map as “blips;” red outlines that tells you there’s an enemy, but giving you no idea as to how many. 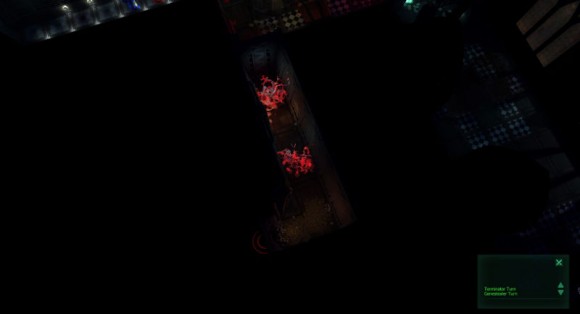 This soon changes as the blips stray into your field of view, revealing between one and three Genestealers.

With good positioning, the Genestealers are revealed at the other end of a corridor from you Terminator, giving you ample time to react. Each shot fired rolls a series of dice, most guns affording a hit only if a 6 is rolled. As such, you want as much distance as possible to give you time to take out the Genestealers before they close the gap.

If you’ve positioned badly, you’ll find the blips solidifying right around the corner from your Terminators, giving you precious little room as you try to fall back from melee.

Melee, you quickly learn, is to be avoided if possible. The Genestealers get multiple rolls to your every one, and generally your Terminators will last a single turn at most before they crumple between the claws.

Even the melee specialists struggle when on the attack and are only really useable to fill a corridor for a few turns before they too go down.

This means that you want to play defensively, each of your Terminators staring down a corridor and mowing down approaching enemies. 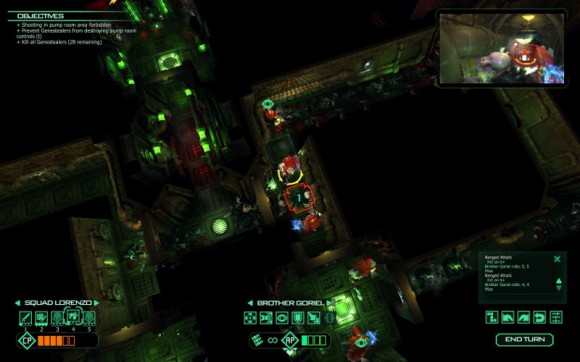 Unfortunately, the game actively discourages this in most missions, with objectives generally asking that you get to the other side of the map or pick up an artefact.

You can’t afford to slowly move your troops up either. In part this is because the narrow corridors prevent proper sight lines, but you’re also made increasingly aware of the fact that while you have a finite number of troops, the Genstealers are neverending

You can’t afford to be bogged down, as eventually the enemy will overwhelm a purely defensive player.

At the same time, rushing forward means getting caught out, Genestealers taking out lone Terminators who lack the AP to fight back. It’s during these moments that you really feel the clunkiness of your troops. They struggle to retreat, but at the same time they can’t press forward reliably.

It’s a good sort of clunky though. One that challenges you to figure out the correct strategic movements. It means that Space Hulk feels like a puzzle game. One where you have to position your troops to block off key corridors for as long as possible, allowing your objective winning unit to make it to the end. 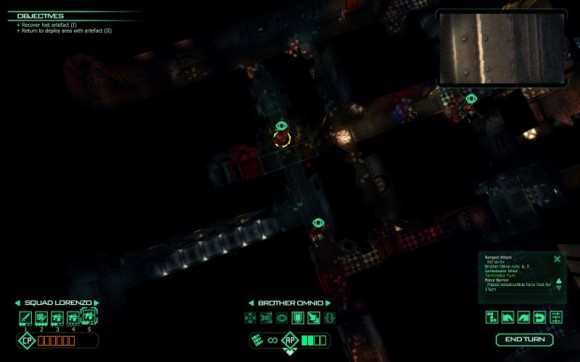 There’s a certain satisfaction in getting your final Sergeant into a teleporter bay as behind him the last vestiges of your defense crumple, allowing a horde to roll into the space he occupied a turn before.

It’s in those final defense moments, as you struggle to buy enough time, that the “Jam” mechanic comes into play. As Terminators mow down any attackers, their weapons have a small chance to shut down, allowing the Genestealers to move closer.

Expending a single CP will clear the jam, but it’s still nerve-wracking to have happen during those close engagements.

However, sometimes you will luck out and have a gun jam three shots in a row.

And lucking out is the most irritating part of Space Hulk. You can have a good strategy, but it doesn’t count for much if a Genestealer gets lucky and dodges four shots in a row, allowing them to close a gap and take down a Terminator

Given appropriate leeway, this wouldn’t be an issue, but Space Hulk is not a forgiving game. Losing one Terminator to a slew of misses often has a knock on effect as the others are caught without adequate cover.

It is incredibly infuriating to be at the very end of a mission, only to be booted back to the very start due to simply lucking out.

It’s nothing too overt, but it does detract from the game and create a sense of cheapness, as if the game isn’t quite finished. 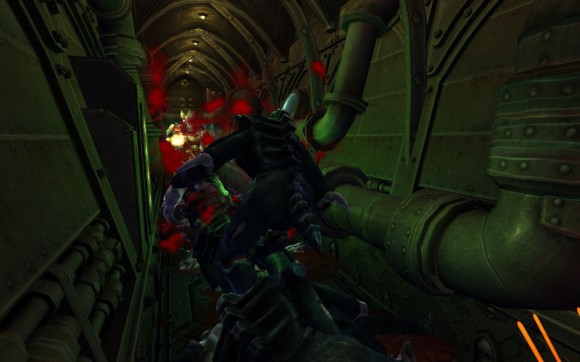 Outside of restarting a failed mission, Space Hulk also doesn’t offer too much in terms of replayability. It features 12 missions from the original board game, as well as three prequel missions that act as a tutorial. Much like a puzzle game, finishing each mission is enough when pitted against an AI opponent.

There is a multiplayer mode available where the Genestealers are controlled by another player, which potentially could have injected some more life into the game. However, each time I attempted to play, I found that my opponent was offline or had forfeited the mission, which leading to me abandoning the mode.

In singleplayer though, I found myself coming away from each mission of Space Hulk with an elated feeling at having beaten the AI opponents. The game is challenging, which makes success sweet. However, the road to victory was paved with sighs of exasperation as Genestealers waltzed past hails of bolters without batting an eyelid, and then slicing apart my Terminators.

Ultimately, the game is also held back by the seemingly non-existent multiplayer and graphical glitches.