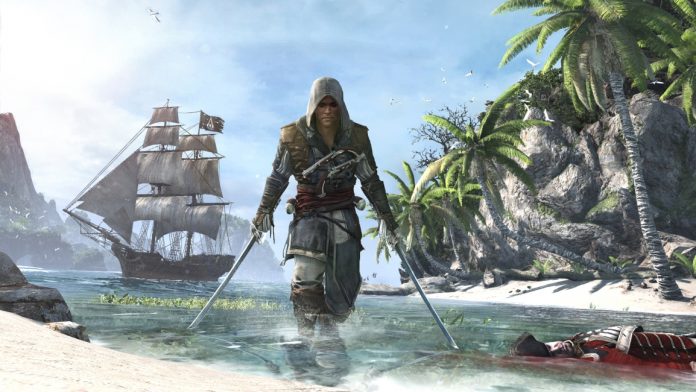 Assassin’s Creed IV Black Flag is set in the Golden Age of Piracy in the beginning of the 18th century. The sixth game of the Assassin’s Creed series has taken the action-adventure genre very seriously. The title combines an interactive and dynamic combat system with an enigmatic and thrilling world, both extremely connected and interrelated. Black Flag presents the life story of Edward Kenway, an ancestor of Desmond Miles, through the eyes of a new research analysts working at Abstergo Entertainment. The whole goal is to discover an exuberating pirate story for a new project and Edward’s seems the most promising one. It’s another story inside a story but that’s no news in the world of Assassin’s Creed.

1. Aesthetics: A Marvelous Representation of Reality

Most of the story is set on the Caribbean and the main cities are Havana, Nassau and Kingston. The game presents extraordinary visuals and magnificent environmental scenes. Everything is well refined and the effects, such as the weather changes, are particularly realistic. In a smaller scale, ships, weapons and costumes are very detailed and precise. There are definitely no doubts about the period that it’s supposed to be represented. Most of the story is spent on sea and I must say that this new content is extraordinary, the waves, the tornados, the strong winds, the clouds – the realism is quite impressive and most of all, immersive. It’s not simply about watching and perceiving, it’s about interacting and experiencing a whole new dynamic of features. 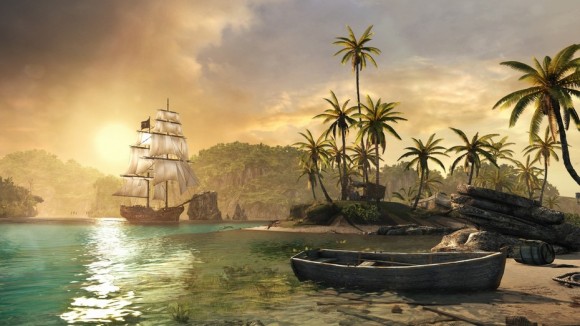 2. Gameplay: Quality and Diversity Above All

In the previous games killing human targets was the main essence, however in Black Flag players have to face a new challenge, the sea. The sea holds many secrets and it’s not all about taming the wild force of Mother Nature. In this hostile environment, swords and guns won’t be enough to sink a ship; alternative methods tactics and strategies are required, especially when fighting military ships. Firing cannons, dodging attacks, as well as managing the ship’s movement simultaneously can be difficult at times but that’s all part of the new challenge introduced by Black Flag. The old combat system is still there – in land, players can still use their old assassination mechanics or create new ones. The game has a huge diversity of weapons, upgrades and killing tactics, which proportionate many different ways to progress into this enigmatic world of pirates, assassins and templars. But that’s not all, the whole system is very dynamic and fluid, adventure is in every corner and there are secret treasures buried in the most unexpected places. By other words, more than assassins, players can become true pirates – act, sail, live and kill as one. 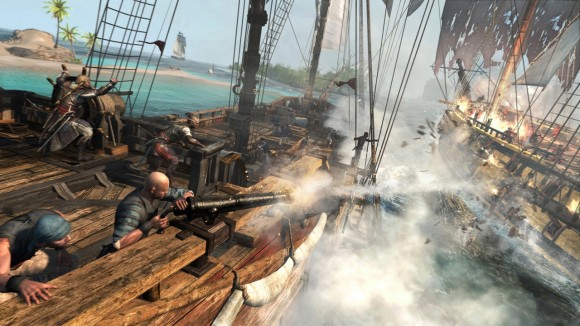 3. Storyline: Decent, Concise Yet Not Extraordinary

Black Flag’s storyline is quite consise, yet predictable; after all it’s the story of another assassin. And assassin’s stories are not that different from each other – a common man discovers that there are two rival secret organizations and he chooses to be part of one. The differentiation usually goes for the individual path; each character has its own story and Edward’s peculiarity is definitely piracy. He left everything behind and sailed into the unknown, hoping that ambition and skill would bring him great fortune. In the end, it surely did, but at what cost? Eventually it cost his own life, a risk that every assassin goes through once they accept to join the ranks. It’s a great story, very structured and detailed but it’s nothing exceptional.

It’s always great to see that developers go beyond the usual gaming tendencies. Pirate games are far from being new, however sailing and fighting with so much realism in a world filled with endless options for combat and adventure… I really don’t think there are many titles around with such characteristics. I have no doubts that the best innovation in Black Flag is the sailing system, where players can become captains and sail their pirate ships, engaging enemies in the sea and plunder them with Edward. Exploring and adventuring has been greatly improved as well. Diving into deep sea or following the leads set in lost map are great additions to the game, at least it proportionate a true sense of exploration. 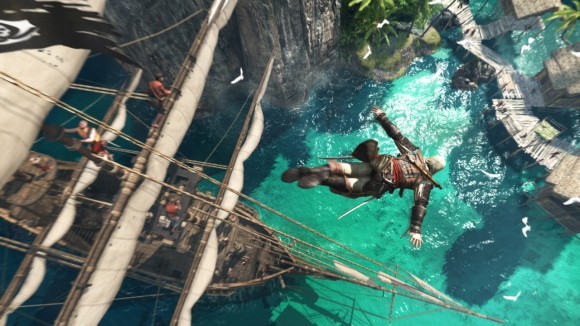 Assassin’s Creed IV Black Flag is certain one of the best games of 2013 and a true gem of action-adventure. In a paradise world where the impossible seems conceivable, players have the command word for everything. There’s a main plot that has to be followed but players can do pretty much anything they want before progressing into the next core quest. For action oriented players, there’s always a ship to plunder, an assassination quest to do or a wild animal to hunt. If adventure is actually what you like the most then don’t worry, there are plenty of options – looking for lost resources or finding lost treasures are just a few examples. I honestly thought that mixing assassins with pirates wouldn’t bring anything bright but I was profoundly wrong. Ubisoft has done it right – they’ve created a unique gaming piece where next-gen action and adventure are well represented.

Cons: The difficulty level can restrain players from progressing; repetitive farming is crucial to upgrade and advance in the storyline.