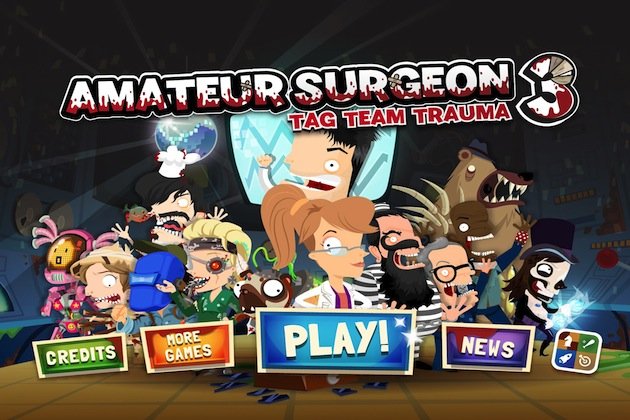 On August 8th, Adult Swim Games released their latest game for iOS, Amateur Surgeon 3: Tag Team. The third game in the popular series of games, Amateur Surgeon 3 adds a couple new things while keeping the same charm and humor as the first 2.

I first heard about the Amateur Surgeon series after stumbling onto the first one online and enjoying it. When I head the third one was out, I decided to pick it up for my iPad. You play as Dr. Ophelia Payne, the newest assistant to Dr. Alan, the main character in the first two. Alan has you flying around the world helping people out. Using the same set of crazy tools, you and Ophelia take on 6 levels of crazy surgeries, with a crazy story to match. Along with the ever-growing set of tools, the newest mechanic in this game is the partner function. After performing a series of combos, the game allows you to tag in 1 of 8 partners to aid you in your surgery. With names like Mr. Giblets (a cyborg pug), Crumpet Murphy (a janitor), and Flow Master (an ex-accountant), each one has a different ability to make sure Ophelia and you finish the surgery without killing your patient.

The one thing that surprised me about this game is how hard it actually is. I struggled to get the 15 stars needed to unlock the third level. The game does give you some hints on what to do, but still makes you figure some stuff out. I am about half-way through the game right now, and I have to say I am very happy with it. The story and game play are well designed and still keep me entertained. Adult Swim, while known for their humorous TV programs, really knows how to make a great game. Amateur Surgeon 3 is up there with Robot Unicorn Attack and Monsters Ate My Condo. I am giving it 4 and a half stars. I would give it 5, but it loses half a star for there not being a great tutorial level. I hope they add more levels and partners in the future as well, but besides that, it is a fantastic game.

For those interested, you can pick up Amateur Surgeon 3: Tag Team on the App Store for free, with in app purchases available for additional coins and blood bags used in game.