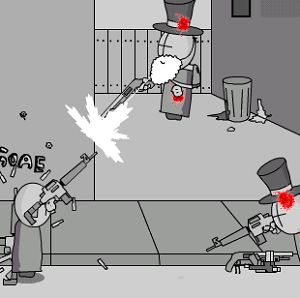 Crafted by the creative mind of Krinkles, Madness Interactive has become quite the juggernaut. It began as a humble action shooter, taking weapons from enemies and using them to exact revenge on the games antagonist, the Sheriff. Why the Sheriff is such a bad guy is still a mystery to me, but that doesn’t stop the game from being fun.

Please don’t let the straight forward description fool you. This game is not only good for a few laughs but it is a challenge in story mode. The practice mode is good for learning the controls and for practicing with different weapons, which the player can spawn with the number keys. Movement is handled by the ever-popular “WASD” keys while other functions are taken care of by the mouse. To pick up weapons, the player must simply click the weapon while it lies on the ground during gameplay. To do a simpple melee attack, swing the characters arm, which is controlled by the mouse, and make contact with any of the enemies to do damage. (Note: A melee attack from behind is an automatic kill.) Your character can be personalized and customized to fit your tastes in the options menu. The controls can be modified there as well.

This one game however, has inspired a plethora of spoofs and spin offs. It all began with the Madness Combat series created by Krinkles himself. It told the story of how the protagonist went about attacking the Sheriff, killing plenty of henchmen along the way. The spin offs were of great enjoyment as well, one of which depicting a ninja fighting a long time adversary of his.

All in all, the game, the animated series, and everything in between are a must see for flash gamers and flash lovers in general.