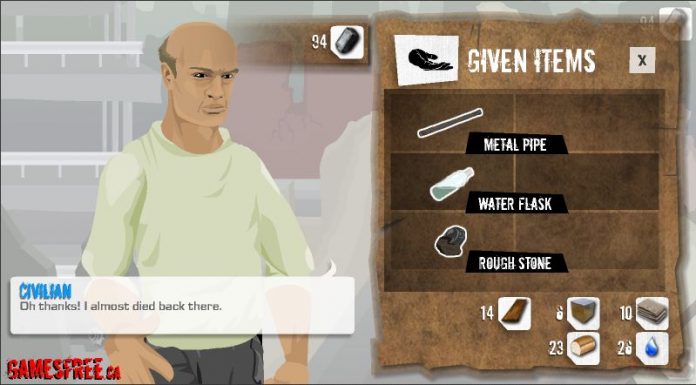 Ah, the great times after the apocalypse! We’ve played so many games based on this scenario and still we can’t have enough. If you agree with my statement, then you will be happy to hear that the folks over at GamesFree have decided to launch Decay of Men, their own flash-based depiction of how the world after the apocalypse would look like. And to sum it up, that would be: unpleasant.

The game’s story is pretty basic: after years of chaos and global corruption, the world has now become a perilous place. Food is scarce and everyone must fight for their survival. As for you, your adventure starts where it all ended. Gather essential elements and try to survive to your next location. Accumulate precious stones and upgrade your equipment and kill not to be killed.

Indeed, most of your time will be spent hidden behind cover, sniping down enemies in “waves”: clear as many as possible to increase the chances of them dropping as much loot as possible, which you can later use to fix your car or trade with other survivors (which, obviously, must be kept alive if you want to have people to trade with).

Although in concept Decay of Men sounds pretty nice, in reality it’s pretty boring due to the static nature of the game and the slow pace of the action. It’s pretty fun nevertheless and it’s free of charge, so if you’re feeling like giving the post-apocalyptic scenarios another try, head over to GamesFree and play Decay of Men!