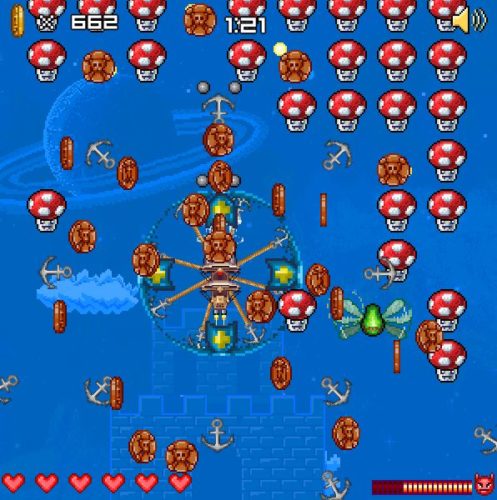 I don’t like it when this happens: I am starting my work day, ready to write some nice articles, and I receive an e-mail from a developer sharing a link to their latest game. And then I spend hours playing that game, knowing that my work day has been ruined. Shameless Clone is such a game and I can only be extremely happy that I found it.

We’re talking about a shmup here, one that starts pretty slow (but just for the first couple of levels) only to pick up the pace and turn intro a fantastic bullet-fest filled with… well… shameless clones of well known characters. This means that you’ll find yourself shooting down enemies that look like Donkey Kong, Bomberman characters and basically everyone you can think of from the 8-bit era. And it’s fun like crazy!

Apart from the retro graphics and insane difficulty (which is just apparent, trust me), Shameless Clone also comes with some updated features, like upgrades for your ship (fire power, fire rate, life and so on) as well as a super weapon that charges as you kill enemies and causes a real deal of damage around. Add to that power-ups during each stage, a ton of stages to complete and the fun factor of your favorite thing, and you have all the reasons to give Shameless Clone a try and never feel ashamed!

So head over to 2pg and play this game. You won’t regret it – unless you usually regret playing instead of working…