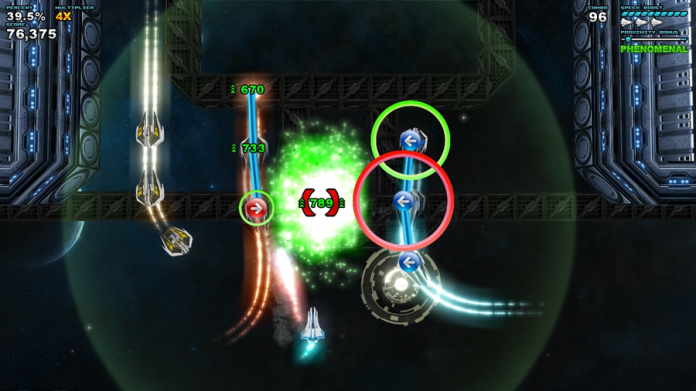 Rhythm Destruction is a hybrid of the shoot ‘em up and rhythm game genres that culminates in an experience like no other. Developed over the course of a few years by developer Curious Panda Games, Rhythm Destruction tasks players with flying through space while avoiding fire and destroying enemies to the beat of some of the most wonderful techno/electronic tracks that will surely ever grace your ears. Traversing space is presented in a top-down perspective that has players weaving in and out of patterned bullets and moving scenery, and attacking by hitting the corresponding key/button that appears above the enemy in perfect time with the beat of the music.

Personally, Rhythm Destruction put me in an awkward, yet extremely enjoyable, position due to how good I am at shmups and how terrible I am at rhythm games. What allows this game to work so well is the fact that either the shooting mechanics or the rhythm mechanics alone would make for a decent game. On display is some of the best manic/bullet hell gameplay I have seen in a while: akin to Ikaruga or the Touhou games. The rhythm aspects of the game are brought about by watching enemy ships as they fly around the screen. Many of these ships will eventually display one of four keys/buttons as well as a circular indicator that acts as your guide to hitting the proper button at the right time; this indicator will quickly shrink to the point where it encapsulates the indicated button creating a perfect perimeter and it is at this time that you should press the button. However, if you’re like me and suck at getting the timing absolutely perfect, then fret not because there is a great amount of leeway in the timing, but you will get more points the closer you are to perfection. The indicator also conveys the speed at which each note occurs via the color it is and quick successions of notes are “tethered” together to give the player even more indication that fast finger work is needed.

Aesthetically, Rhythm Destruction has a typical, yet charming, space-station style that is very colorful and highly polished; clearly the developers had a strong sense of art direction because of how well everything fits together. The visuals are further enhanced by the intelligently designed levels that present a great deal of variety and challenge, as well as providing a perfect backdrop to complement the music. There are a few minor issues I have with the graphical options, namely that you cannot change the resolution, only the aspect ratio, so if you’re playing on a 1080p or higher monitor you’ll be playing in letterbox mode; this certainly isn’t a deal breaker by any stretch of the imagination, but higher resolutions would be nice. There are also a few cheap deathtraps and unfair moments present in some of the levels, such as having to shoot an object out of the way to proceed; these moments are unfair because if you miss there is no way to avoid death, and some spots are incredibly difficult to survive unless you know what is about to happen or have the reflexes of Sonic the Hedgehog. However, taken as a whole the game is well designed and never becomes frustrating, so the few unfair moments that are present aren’t very detrimental to the game’s overall package.

By far the highlight of Rhythm Destruction is, of course, the music, which is composed of an amazing blend of different techno subgenres that give the game much of its unique “flavor” and tone; I honestly can’t picture anyone not dancing at least a little bit while playing. You start each level much in the same fashion as picking a song in Dance Dance Revolution. There are 4 difficulty tiers and ten songs, each harder than the last. While picking a song via the stage selection menu, you are given a wealth of information regarding the selected song, such as its duration, difficulty, BPM, number of notes, the artist’s name, and your personal success/fail ratio as well as high scores set by other players. Most stages also have a hyperspeed section that has you steering your ship in time with the music; here, there aren’t any bullets to dodge or walls to avoid, which means that you cannot die during these moments, and you could actually let go of the controls for the duration of hyperspeed if you wanted to; though you would miss out on a lot of points if you did.

One thing that kind of bothered me at first was the lack of sound effects during levels; to me, it seemed as though I had my game on mute, and had music playing over it. However, once I got into the game a little more, the gameplay and music started to line up; it just took my ears some time to adjust. Originally I would have suggested the developers add a slight “cue” noise when an enemy ship is destroyed, but after playing a great deal of this game I can honestly say I prefer that it lacks sound effects; this gives the game a sort of tranquility that allows the music to fill your mind so it can mesh the level design and sound into a single cohesive unit.

Apart from the aforementioned aspects, Rhythm Destruction has a great deal of other perks that add another layer of polish to an already gleaming game. For one, it has support for an Xbox 360 controller, which, in my opinion, is always a welcome addition to any PC game. Also, the developers clearly went to great lengths to create a community-like atmosphere that pervades much of the game; you’ll be able add friends, send and receive challenges to and from other players, and view high score/player rankings for each song. There are also a number of achievements for you to unlock and a list of goals to complete for each stage, as well as a casual mode that allows you to play easier versions of unlocked levels with infinite lives; though you will be unable to complete level goals while in casual mode.

Rhythm Destruction is a fantastic game that really deserves a lot more attention than it’s getting. While it does have a few minor problems and the music doesn’t always line up with the destruction of enemy ships as much as it could, it is a very enjoyable, yet difficult, experience that really shows how far a little indie ingenuity can go when making a game. Rhythm Destruction is out now for $4.99 and can be purchased via its website or Desura; Curious Panda could also use some help getting the game greenlit on Steam, so if you love this game, or like the way it looks, go ahead and give them a hand.