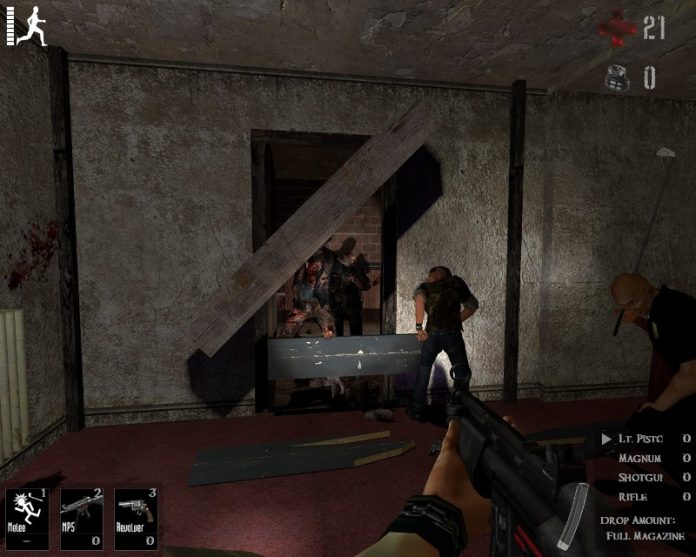 There’s something about zombies that we gamers, gun lovers, and sword fight enthusiasts just find irresistible. Zombie apocalypse games have been on a steeply rising trend these last few years, and they have taken many different avenues on how to plunge a player into the horror survival world of the walking dead.

We’ve seen everything from static defense of a barricaded area like in Killing Floor, to a mad dash from one safe room to the next like in Left4Dead, to straight up mowing through hordes in glorious carnage like in Dead Rising.

In the vast majority of this genre’s titles, both independently and professionally made, players mainly experience the game through the plight of the outnumbered survivors; either a single person or a team, whose members simply die if beaten, and that’s that.

There are of course the Left4Dead games where players can choose to be on team undead and mess with the humans in Multiplayer mode as they hightail it to the safe area, but again, the team sizes cannot be changed (with the exception of human death).

In one of my favourite games ever – a free multiplayer Half Life 2 mod called Zombie Panic: Source – the way in which the two teams work against each other is totally unique to video games, all the while being true to the reality of the situation: human ranks shrink, while the undead’s beef up.

ZPS has often been called an inferior imitation of L4D by reviewers, but in this writer’s opinion, ZPS does things no other zombie game ever has. It was even awarded second place in ModDB’s Mod Of The Year in 2008. Suck on that, disbelievers.

The round starts in a small room where you choose your team by either walking through a marked door, or pressing the team hotkey (F1 for human, F2 for zombie). Of the Zteam, one is chosen to be the Carrier zombie, who is faster and more powerful than the rest. A carrier will be chosen from the human team if none have opted into the corpse squad, which is what happens most of the time; so you will often hear the pained complaints of someone disappointed they didn’t get to shoot stuff this match.

And they’re off!~ the humans must scramble to find weapons and ammunition to fend off the dead, for if they should fall, they turn into the same freaks against whom they fought! 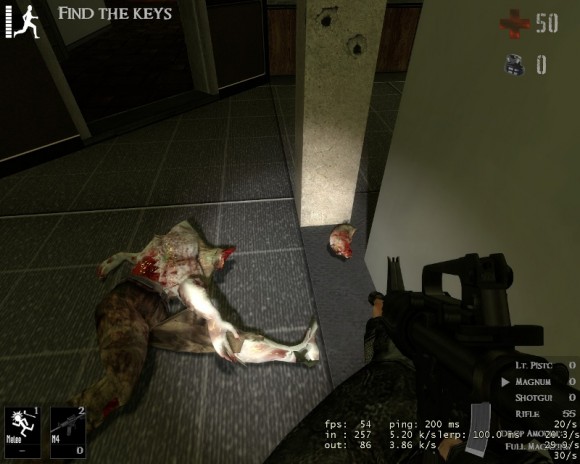 Zombies have only one objective: to devour the living! The carrier, though usually alone at the start of the game, is still a force one should not underestimate. His unique power of striking with a chance to infect a survivor means he doesn’t even need to completely kill you to turn you into his minion.

All zombies have the ability to dash for a few brief moments, often playing a subtle but crucial role in 1on1 kills. Later in the round, Zteam is encouraged to coordinate and attack in a swarm, as the humans will have gained some foothold in the form of a barricaded room or a group of well-armed runners. Personally, I like to wait behind corners in places of usual traffic, or stalk stragglers until an opportunity for surprise attack arises.

In objective map games, the zombies have infinite lives, and will return to the game no matter how many times they die. However, Z lives are limited in survival maps, with one gained for every conversion, and one lost with every zombie death. When these run out, dead zombies will not be able to respawn; and it becomes their turn to feel what it’s like to dwindle in number. The death of the last zombie sounds the gong of victory for the living.
Human gameplay is a little more rich in content, as their objectives can be either to complete tasks around the map in order to escape, or simply to survive until Zteam is out of lives . Teamwork is highly encouraged here as well, but it is not impossible to fend off up to three or four deaders at once, if your aim is true and your feet nimble.

Survival by combat is available in a number of delicious flavours; you’ve got a melee arsenal which can vary from frying pans to machetes to sledge hammers and even to a folded chair and much more to choose from. There are four different pistols to wield, and are the easiest gun to find and to load, as their ammo is also the most plentiful kind. Then we have shotguns like the Remmington, a dual-barrel, and the Serbu super shorty, which all pack quite a whallop in close-quarters. There is a magnum for those whose hands are steady in the face of danger, popping skulls open with one-hit headshots. There are automatic rifles for the lovers of spraying death from a distance; and finally there are explosive goodies like grenades and remote C4 charges.

Strategies vary per player, grace to such a wide selection of murder machines. 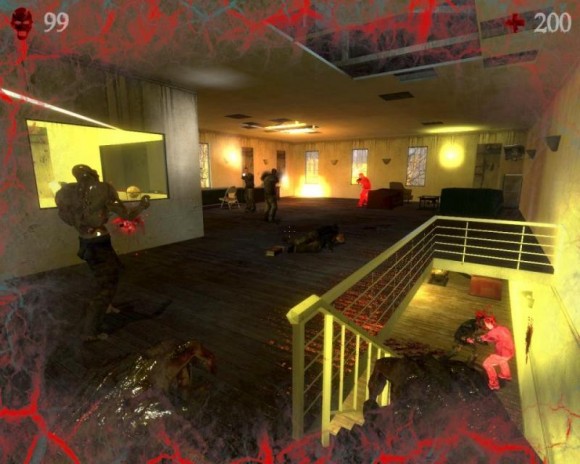 And though there is no actual “safehouse” in this closed arena-style map, survival by boarding up a room or scurrying around like a squirrel is also not impossible, but neither are they very probable in the long-term. Barricade boards can break, couches can be tossed back, and human stamina will not allow you to run forever.

Your run speed is affected by your stamina, and by the weight of the weapons and ammo you carry; which is a brilliant way to reward the habit of sharing and putting hoarders at a disadvantage. Believing one’s odds improve as a one-man army does not last long in this game when your stamina runs out in 10 meters, and your every shot only attracts more zombies who have no intention of letting you reload.

When all else fails — your barricades are down, your clips are empty, and corpses have stormed through the doors and windows — PANIC!!!!

The Panic button is sometimes a crazy-useful last resort for a desperate survivor. It drops everything you’re carrying – weapons and ammo – except for whatever is currently in your hands, and instantly replenishes your stamina to allow you to outrun your tail. Now flee, human! Flee for your life, but your immediate objective is now to re-arm yourself, for the dead do not cease.

Not until a lifeless world is all that remains.

Or until zombie run out of lives, and survivors win the round. 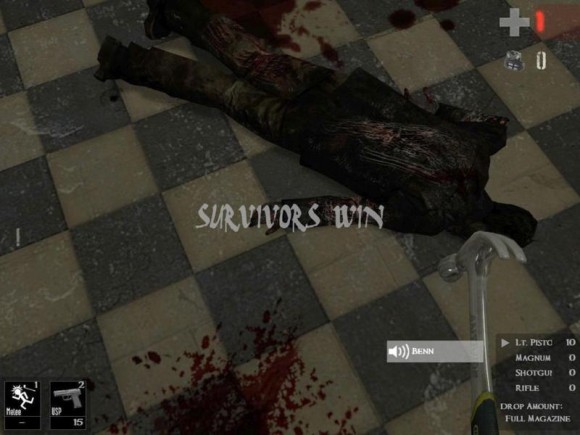 Zombie Panic Source is a truly one-of-a-kind experience for survival FPS lovers. I have thoroughly enjoyed the many ways to beat down deadheads and hunt the pinkskins.

This game has my sincerest praise.