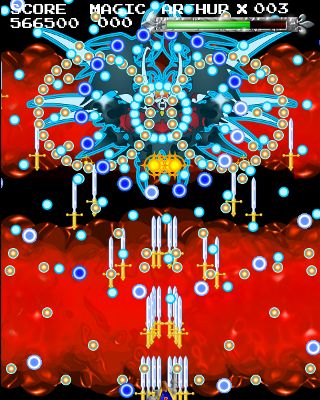 I’m sure you’ve played all sorts of shmups from the good old days to know, but I think that you’ve never played one in which you take the role of a knight and fight against other medieval creatures… and not space ships! Well, now it’s your chance to experience the medieval times in a classic shmup style with Defenders of Avalon, a pretty cool indie game that can be downloaded and played free of charge right now.

Described as a “vertical Bullet Hell style shmup,” Defenders of Avalon allows you to play either as Arthur (with a wider shot pattern) or Merlin (more focused shots, plus chargeable alternative fire) against hordes of enemies, including multi-stage boss fights that can easily turn into real nightmares. Just check out the attached screenshot and you will know what I mean.

Of course, the most important part of Defenders of Avalon is that it’s available for free – an indie game like this would usually set you back at least $10, so getting it for free can automatically be considered a gem. It’s not perfect, it’s not flawless, but it manages to provide extreme, intense action and is at the same time challenging but not insanely difficult, making it a great choice for fans of the vertical shooter genre.

And since it costs you nothing to give Defenders of Avalon a try, head over to the official page and download & play it right now!