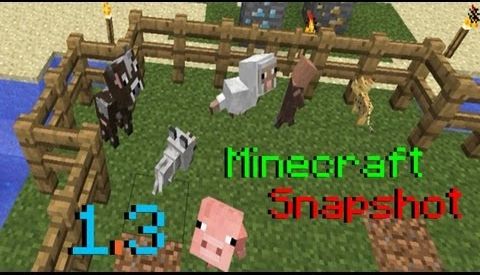 The 1.3 update for Minecraft is one of the biggest updates ever released and it certainly is the one that we have to wait the longest for. But at least now it has a nailed down release date, which is August 1st. So in less than one month we’ll be able to play Minecraft 1.3 and enjoy the hell out of it!

According to the post on the developer’s website, the Minecraft 1.3 update will bring some fundamental changes to the game engine and a lot of improvements an tweaks. You can see some of the new things you should expect to be able to do and see in Minecraft 1.3 below:

– multiplayer fixes to offer a smoother experience in the game, including an updated chat screen.
– emeralds, emerald ore and a trading system implemented
– you will be allowed to write books and leave them in the game’s world for other players to read them.
– added tripwire, so you can create new traps and contraptions.
– new half-slabs, cocoa plants and tweaked dispensers, leaves, cauldrons, levers, gravel, pressure plates, cookies, buckets, boats, minecarts, ice, furnaces…
– plus lots of bug fixes and new features

Unfortunately (but surely just for a small number of players), the new Minecraft 1.3 will also require more resources especially because of the single- and multi-player mix, but I am still sure that most of the gamers won’t even feel the difference and will be delighted with this latest update of the game. Which, in case you forgot already, will be released on August 1st.