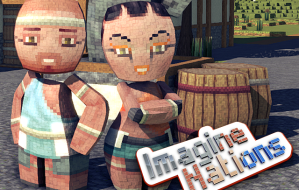 The indie developer Cat Banana Studios has a new project, Imagine Nations, a sandbox game that will defy players to create their own journey. This title promises to deliver a choice based system, deep customization options and a combination of elements from many other games. The company introduced the upcoming title and ensured that players can totally forge their progression path:

Imagine Nations is a game where players will be able to build their own adventure, cultivate lands,  seek out new civilizations as they quest, and expand their world.  The choice is up to the player as to how you want to progress. (…)  The opportunities are as endless as your imagination.

In Imagine Nations, players will be able to rise up entire civilizations but first they must device and build the first house, the first plane, the first ship… Having specialized jobs such as engineers and funding technological researches will surely improve your civilization’s evolution and unlock advanced constructions.

The funding campaign for this project has already started at Kickstarter and Steam Greenlight.