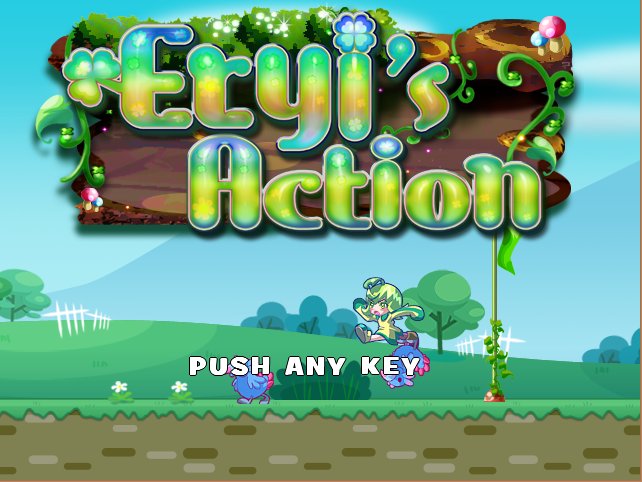 It’s been a few years since the release of Super Meat Boy, and even VVVVVV is getting old at this point. These challenging platformers have inspired a slew of imitators, but thus far no game has managed to live up to the high standards set for modern platformers. Enter Eryi’s Action. At first glance on Steam, this game looked more or less like Toki Tori, sporting a boppy, colorful art style with charming sound effects and music. This is not a new development in platforming; in fact, most mediocre, fallen-by-the-wayside  platformers seem to take this colorful, goofy art style to hide their shoddy mechanics. So, is Eryi’s Action yet another one of these dime-a-dozen indie platformers?

Not exactly. Eryi’s Action is what some have called a “trapformer.” If you’ve ever played I Wanna Be the Guy, you will recognize the feel of this game right off the bat. Essentially, it’s a platformer that requires a great deal of trial and error to progress. Traps and pitfalls abound, each designed to be completely unnoticeable until it’s far, far too late. Eryi establishes this right off the bat. The game starts off in Eryi’s house, where our heroine plans on eating some melons. Unfortunately, her melon has been stolen by the evil Farta, and Eryi must travel out into the world in search of melon. As the player goes to leave Eryi’s humble home, a massive frying pan falls from the top of the screen, catching the player off-guard and killing them instantly. (For the record, the death screen in the game is made to resemble a Mario death screen, showing how many lives the player has left. In Eryi, the player starts out with 3 lives and the number then counts down infinitely into the negatives.)

The game feels just right, as a platformer. The jumping borrows heavily from the feel of an old-school Mario game, giving just the right amount of slipperiness without making Eryi completely uncontrollable. The platforming really is spectacular, and there are times in the game when the player wants nothing more than to leap around freely, making the most out of the well-built jumping and running. Of course, the sheer quantity of deathtraps usually means that any happy-go-lucky walk ends brutally and quickly. 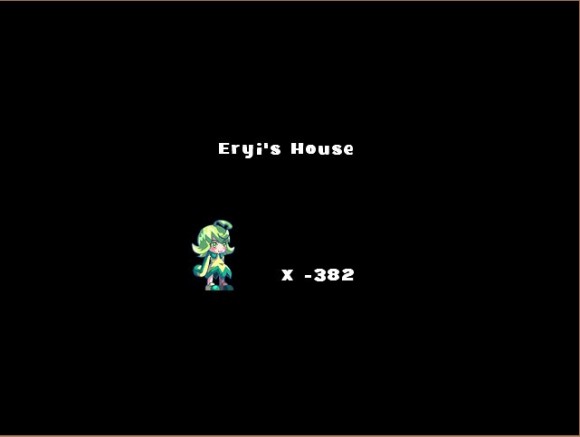 As for these deathtraps: they are cleverly designed, and at times are almost funny. Cleverly placed invisible or apparating blocks will stymie players at every turn. At one point, early in the first stage of the game, the player sees a large gem floating in the sky next to a platform. When the player leaps on the platform and tries to then jump off and collect the gem, a wall appears, blocking the player’s progress. When the player turns back in defeat, another wall appears, trapping them on the small platform. Then, spikes fall from the top of the screen, instantly obliterating the player.

The stages themselves are well-varied, with no two stages feeling like old hash. There are twelve stages in total, and they each include different mechanics to keep the player on their toes. In particular, there is a running gag involving the end of each stage. As in Mario, the player finishes the level by hitting a flagpole and then auto-walking off the screen. In each stage, there is some devious obstacle to safely reaching the flagpole and walking away. This is introduced early on, too; at the end of the first stage, just as the player is about to leave the screen, a spiky ball falls out of the sky and kills them. The developers are making it completely clear to the player exactly how aware they are of the tropes of the genre.

One of the most curiously appealing parts of the game is how well-paced the frustration is. While yes, you will end up yelling at the screen and throwing your controller, each obstacle is (and feels) completely defeat-able. This is notably different from I Wanna Be the Guy, an infamous trapformer that is truly a test of the strength of a man’s soul, and has left many players weeping and broken. Eryi manages to balance frustration and determination in a way that surpasses I Wanna Be the Guy and makes a rewarding and well-balanced experience.

Eryi isn’t all good, of course. The options screen is woefully empty on the PC version. This is a pretty common complaint for any game hastily ported from the consoles, but Eryi doesn’t even have basic support for changing resolutions. (The game also crashed for me in fullscreen, but I’m willing to blame that on my computer, rather than being entirely the game’s fault). The key config screen also doesn’t appear to list keyboard as an option, although it is completely playable on the keyboard. For those who have the game and can’t figure out how to play on the PC: the important buttons are Z, X, and C!  Z to confirm menu options, X to jump, and C to pick up items. Arrow keys to move, of course.

Overall, Eryi’s Action is a well-above-average platformer, and deserves better than to be relegated to the bottom of the Steam Indie Games section. Anyone who is even mildly interested in this game should play it to death. And then death again. And again.