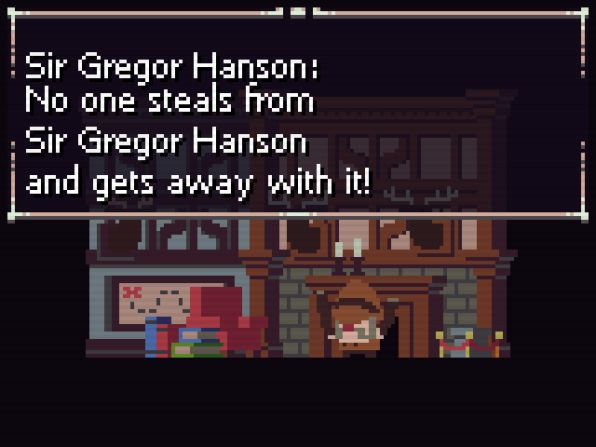 One of the most convenient things about indie games is that you can play one and review it all in the span of a day. But the thing I really like these sorts of games is their ability to leap from the shackles of triple-A games, that do anything they can to please as many people as possible, and instead opt to cover all the smaller niches of the gaming population. That is to say, Dark Moon Rising, and many other indie games, are not afraid to get their hands dirty with topics that are too ‘much’ for wider audiences.

Drunk Devs, first made known with the indie platformer, A Man’s Quest (notable for its excellent compression of the mythical hero’s journey), has now made a third platforming adventure: Full Moon Rising.

Following the story of a werewolf in Victorian England, the player will run and jump his or her way through the game’s linear space once, threatened by many enemies that cannot be killed or stunned, and then back, in the opposite direction after obtaining full wolf-powers. While very simple in essence, the game maintains a heavy blanket of challenge through floor design and enemy placement, increasing steadily as more types of enemies are introduced, and used in junction.

But the game does show mercy: you obtain the capacity to withstand six hits from any foe early on in the game, and you’re fully healed at the start of each room. That said, death results in the player having to restart from the beginning of the room he or she is in, so while blundering headfirst into enemies, able to afford the hits they deal, may occasionally work, it does not punish the player experimenting. Trial and Error has been the philosophy behind failure in the developer’s previous titles, and it does so by making death as quick and painless as possible, to get you back up on your feet and prevent the pace from tapering off. One particular moment in which I enjoyed the approach of experimentation had me set against a series of small spires, bombarded by enemies that threw trash at you in tall arcs. Because I had managed to conserve my health so far, I could afford a few hits, and succeeded in jumping a piece of garbage, took one hit, got launched into the air (as any hits you take knock you back in the direction of the hit’s force) and cleared a jump all the way to safety. Do I consider it exploitable design? … Maybe. But did I enjoy doing it? Absolutely!

The key difference between your human form and your, later obtained, wolf form is that the wolf is equipped with a dash-attack that can kill enemies, absorb the health of some, and propel you a good distance left or right, depending on which way you were facing. This brings about what is possibly my most glaring criticism of the game, and that is for all the times I died getting through the game as a human, I breezed through it as a werewolf without dying a single time. I had expected to have to use my new dashing ability to get through new obstacles that would otherwise be too slow for as a human–something that refreshed the game, beyond the amusing, first, few, gore-spattered kills. Do not get me wrong, what the game lost in overall platforming difficulty came back in the final boss fight, though, and the bravely innuendo-peppered dialogue became side-splitting at a point, and, as per the norm of Drunk Devs, the ending is comical to a T, that had me still laughing as I played through the … ‘endgame’.

Being very easy to play and replay, not taking any large amount of time at all to enjoy and maintaining a consistently upbeat mood and pace, Full Moon Rising is easy to recommend with its short completion time and humorous quips, four stars out of five are well-deserved.