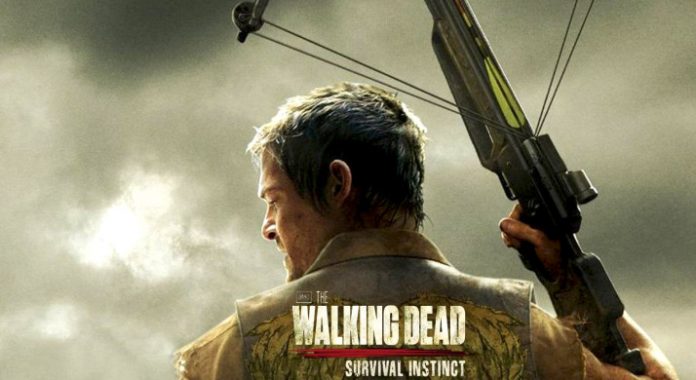 The Walking Dead: Survival Instinct is a zombie apocalypse first-person shooter game developed by Terminal Reality and published by Activision. The game’s storyline is a prequel to the Walking Dead TV Series and it focuses on the Daryl and Merle Dixon, the reckless brothers who are playing a decisive role on season 3. Nonetheless, in the game’s timeline the zombie invasion has just started and Daryl must find a way around the chaotic environment. Unlike the series, the game features simply one thing: surviving the tragedy that is currently afflicting the world. Collecting food, weapons, ammo and fuel is a liability. However, Daryl will not leave his brother behind, and finding Merle will become a priority instead.

Survive at Any Cost

Daryl Dixon is the main and only playable character in game. The plot takes place in Georgia, however the brothers will try to reach Atlanta in hope to find a breathing refugee camp; across their journey they’ll meet many other survivors and be able to decide their fate as well. Travelling in the presently plagued world is everything but easy, finding food supplies and fuel becomes nearly impossible. For Daryl it’s not as impossible though, with his military skills he is able to slay crowds of zombies – one by one they’ll eventually fall (temporarily), since there’s always more somewhere else. Across the Survival Instinct journey, the main goal is exactly to ensure your own survival by collecting as much food packs as possible, gathering different types of weapons and keeping them ready, with as much ammo as you can. As you can imagine, you can’t carry everything around, it’s materially impossible, you don’t even have a house or a base to store gear, so you need to choose which weapons you want to keep for your team. Having silent weapons and fire weapons is always a smart choice; don’t forget that firing a gun does a lot of noise, thus alarming all the walkers around you, which can be deadly for you. During most of the game players have to use melee weapons or the cross bow, simply because it’s impossible to kill every walker with a bullet, first because there’s not enough ammo in the game to do so and second, well if you want to risk dying every few seconds, you can try it. Sneaking past walkers and silently taking them down is mostly what players have to do during the whole game, there’s really nothing much to explore or do besides ending the suffering of others.

In Survival Instinct, for some unknown reason, people always go hunt alone instead of sticking together. Daryl loves to solo, it’s a very characteristic trait of him on the TV series and in game it’s exactly the same. As the group leader he can order his companions to go search for supplies or stay in the car, however they do not share Daryl’s skills and as so they might die during the pursuit. Another strange thing is the ability or the force ability to dismiss survivors, supposedly because your car doesn’t have enough room for them all. In my opinion, this is a great mistake made by the game’s developer, I mean there are thousands of cars around and you kick a survivor simply because you can’t carry him/her with you? It gets even worse when Daryl gets a five seats car and this problem remains. I understand the developers didn’t want players to have four or five survivors at the beginning of the story but the solution they’ve found was actually very poor and unrealistic. The Walking Dead: Survival Instinct has absolutely no character development or attachment, all of them can be seen as human resources to be explored – you send them out to search things for you and hope they eventually manage to come back, if they don’t, all you’ve lost was the weapon they were carrying. The game is totally about action and exterminating walkers, there’s nearly no social or emotional events, even between Daryl and Merle, there isn’t much information about them, if you didn’t watch the series you might get lost or wonder a lot of things.

The featured world of The Walking Dead: Survival Instinct is very incomplete and unrealistic in many ways. There’s a huge effort in making fights realistic, blood splashing everywhere, heads flying off when you use an axe, walkers noticing your presence when you run or walk too close… but then there are shameless things such as not being able to search the inside of a car. You can definitely notice the game has been rushed when you face repeated map scenarios and see the same zombies over and over again. I guess Terminal Reality didn’t have enough time to create alternative zombie models and different maps. Another strange thing is when you kill many walkers in one place; their bodies will magically disappear instead of pilling up. The game is filled with unrealistic details, things that could have been easily fixed in order to offer a better gameplay. For example, Daryl’s inventory has the exact same slots as his car, how can that even be possible? It’s like an aberration of all times, stating that a car can carry as much as a single man. The journey is very short as well; players can finish the game within days even if they do not spend a lot of time playing it and the longest moments of the game are normally the side quests, where Deryl has to look for fuel to keep traveling.

It’s surely a unique experience, to be able to play a game based on a TV series; however the gameplay could have been much better. Even for pure action players, the game will probably become tedious after a while, there’s really nothing much to do and the enemy level is always the same, they don’t become stronger, faster or possess any kind of skills, so you’re basically fighting the same enemies the entire game. There’s no character attachment as well, it’s all about, Deryl and Merle, all the other characters are there but they’re walker’s food, they can die at any time and there’s nothing you can do about it. Overall, the game is quite monotonous for an action/horror title and the gameplay is abysmal compared to new releases such as Tomb Raider (2013) and BioShock Infinite. I thought we had left behind those awful times where swapping weapons and killing the same opponents were the best gaming developers could offer us but clearly, I was wrong.

Pros: Fans can play a game based on the Walking Dead TV series; kill zombies in a gory way.