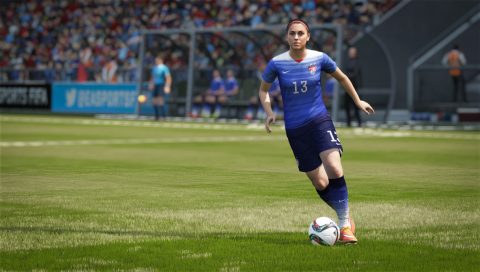 EA has announced that FIFA 16 will introduce female national teams, a first in the series’ history.

There are 12 teams being included in this year’s edition of the game, which will be released on the 25th September. The national sides added are Australia, Brazil, Canada, China, England, France, Germany, Italy, Mexico, Spain, Sweden, and the United States of America. They will be playable in the Kick Off, Offline Tournament and Online Friendlies game modes.

“Bringing some of the best women’s players and teams in the world to our franchise is a massive event for EA SPORTS, and we are equally excited about bringing millions of fans a new way to play,” said EA Sports boss David Rutter.

“We’re making sure fans get an authentic experience when playing with Women’s National Teams thanks to our innovative player capture and reference tools, as well as the sophisticated gameplay platform which we will continue to innovate on in FIFA 16.”

You will be unable to pit female teams against male teams. EA said in a FAQ: “Keeping in line with how women’s football is played in real life at this level, women’s national teams can only compete against each other in FIFA 16.”

The player ratings will also be different for each gender, with each athlete’s rating being assessed against other in their gender, which EA says this: “may mean that an 85 rated female player may not perform the same as an 85 rated male player.”

What are your thoughts on this new feature for FIFA 16?