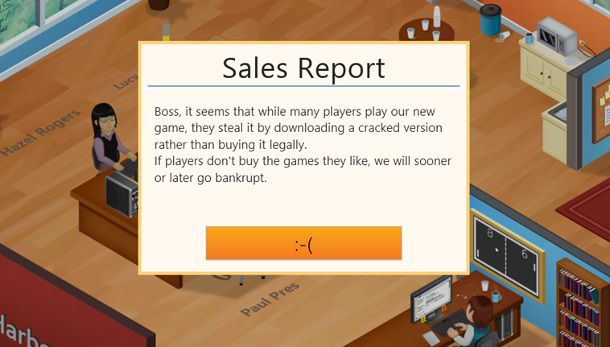 Yesterday we brought you the news about Game Dev Tycoon, a game that was released on Torrent sites as a “Full” version but had a bug implemented by its developers which saw the game, at a given point, turn into an impossible to win battle: the virtual development studio starts to collapse due to lack of funds caused by… the piracy of the virtual games developed in Game Dev Tycoon. And if you are to ask me, this is 10 times better than any possible DRM.

I will be honest with you and admit that until yesterday I have never heard about Game Dev Tycoon – something that usually happens with great indie games – but now I am more than impressed. Not only by the smart way of making people aware that they have to buy games in order to support the game developers, but also because of the numbers. According to Greenheart Games, the creators of this title, almost 94% of the players were on pirated copies and represented a value of almost $25,000. Now that sum, for everybody, is HUGE. And it was a sum that the developers basically lost due to their game being stolen.

The irony is that in this case, it was piracy that made me purchase this game. Not the fact that I have pirated Game Dev Tycoon – just to get this out of the way – but the fact that it’s basically piracy that made me hear about it. I was so impressed by this story, by the numbers (and I also happened to find the game itself delightful from videos and info) that I decided to “splash the cash” and download this game. Even if Game Dev Tycoon is not the great game I assume it is (expect a review in a near future, by the way), it’s still not a lot of money lost for a person: there are places where a coffee is 8 bucks and even more, and I can afford to skip a coffee. But the developers had to skip at least 3,000 and that’s not good.

So, did we learn a lesson from this? Probably the best one that can be learned is that smart marketing is smart marketing. Luck matters. And, most importantly, people will pirate games no matter what their price is. But we should at least learn a lesson from Game Dev Tycoon and think about the people behind the desks who have families to feed and who simply see money stop right in front of their pockets before vanquishing forever. And this should make us skip a coffee, buy a game. (By the way, you can buy Game Dev Tycoon here)

I am also extremely curious if this, as I suppose it did, had a big impact on the game sales of Game Dev Tycoon. I have contacted its developers to see if this “scandal” had a big effect on the game sales and they can happily drink all the coffee they want. I’ll update this article when we get an answer.