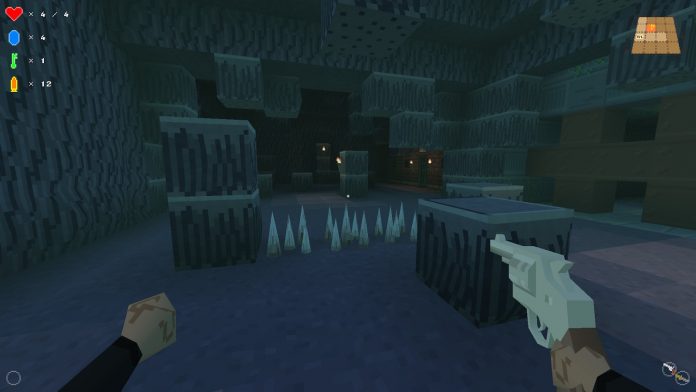 Next time you’re bored and have nothing to do, try out this new fun word game I just invented: the Video Game Genre Mix-And-Match Game! In this game, you throw together buzzword adjectives for gameplay and theme, and see what sticks. Here, I’ll start: a first-person Lovecraftian immersive sim with roguelike elements. Sounds fairly kooky, doesn’t it? If you just said “I don’t know, I might play it,” then put your money where your mouth is and go check out Eldritch, which was released on October 21 for PC.

Eldritch is perfectly described by the word jumble above. If you need a little more help understanding it, though, let’s take a look at the components. First-person: fairly straightforward. We’re all familiar with FPS’ or first-person adventure games. Eldritch has a bit of that low-poly Minecraft feel to it, but it’s very clearly first-person. Lovecraftian: again, not too complicated. H.P. Lovecraft’s bizarre horror literature from the early 20th century has influenced countless artists and gamers alike, and this game leans heavily on the mythos of Lovecraft’s elder gods.

But what exactly is an immersive sim? This is a fairly new term to the gaming world, even though it describes games that are the grandpappys of modern design. Think Deus Ex or System Shock. The core components of an immersive sim can be squishy and ill-defined, but essentially the idea is to put the player in an “immersive” situation where they believe in the rules of the world around them and then play out the game following those rules. The system generally has to allow for branching paths and free interaction with the environment.

And both of those come out in spades in Eldritch, thanks partly to the final component of its jargon-title: “roguelike.” This type of game has gotten more and more publicity over the past few years, despite being named for a game (Rogue, of course) that was released in 1980. The core component of a “roguelike” is random generation of environments, loot, monsters, etc. Think Binding of Isaac, Dungeons of Dredmor, FTL: Faster Than Light, or even Rogue Legacy. At first, it seems like this genre wouldn’t really match well with the in-depth world of an immersive sim. But Eldritch uses the perfect glue to hold these two game designs together the chaos of the Lovecraft mythos. What better way to justify chaos and randomness than with monsters and beings whose very forms cannot be perceived by our mere human eyes?

Eldritch pits the player against three successive dungeons, each one with progressively tougher enemies and traps. Each of these dungeons is randomly generated each time the player dies, however – and the player dies often. Every time the player dies, weapons and health get reset to default values and it’s up to the player to go seek out the upgrades he or she just lost to some evil floating eye or mysterious hooded figure. There is a constant “bank” of currency that can be retained from life to life, but that only goes so far. It’s up to the player to cross his or her fingers and hope that the dagger isn’t hidden too far down the first dungeon this time.

The game feels slick and responsive; combat is excellent, which can be tricky in such a low-poly game. Movement is fast and wonderfully controllable, with the right balance for both slow and sneaky bits and fast-paced, breakneck sections of the game. There were times when it felt more like Quake than System Shock.

Oddly enough, the sound design in the game is arguably one its best features. The monsters all have fairly unsettling sound effects that can be heard for miles around, giving the player a feeling of being surrounded by invisible enemies making horrible noises. It’s a really nice touch, especially for a game based in the mythos of Lovecraftian horror. The ambient music and sounds work together very well, building up an atmosphere that barely even needs graphics to scare the player.

And the game does have its scary moments. While it would be dumb to try and list them all, there is one particular type of enemy that is built extremely well. If you’ve ever seen the “Blink” episode of Doctor Who or played SCP: Containment Breach, you will be familiar with a certain variety of enemy: a statue that animates and teleports to the player when the player isn’t looking at it. It’s become relatively common in indie horror games to try and introduce this type of enemy, but Eldritch pulls it off with a combination of excellent sound design and well-made visuals that sets it apart from any other attempts to recreate the Doctor Who “weeping angels.”

Eldritch is a weird mixing bowl of a game, with bits and pieces of different genres and stories thrown into one low-poly world to make an altogether unique and enjoyable experience. If any component of its jargon-laden descriptor intrigued you in any way, do yourself a favor and pick it up.