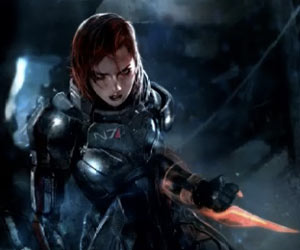 UPDATE: Bioware have just released a new video of several voice actors from the Mass Effect series thanking fans for their support and appreciation for Bioware’s trilogy. It can be viewed here.

Yancik Roy tweeted a photo of a design artist working on creating a new character and vehicle. The tweet said “…with new characters to fall in love with.” One tweet was a photo of a new enemy type being designed and it read “…new enemies to encounter.” Michael Gamble’s tweet showcases a photo of a man playing the game on what it seems like a PC with an Xbox 360 controller. It reads “The next chapter of Mass Effect is upon us!” A more recent tweet was released which shows a woman designing a particular environment. It reads “…and new worlds to explore.”

N7 Day is a designation for the mariners in the Mass Effect universe who have completed a certain type of training.

“As we celebrate N7 day, we look back at the talented people who worked on the Mass Effect trilogy, and we remember our inspiration for some of the great pieces that have made Mass Effect so iconic,” the first portion of Bioware’s messages reads. “We celebrate the fans, for their support, and for their commitment to the original characters that we proudly decorate our studios with, and the new one’s we’ve added along the way.”

Various news outlets have contacted EA but the company responded, “There are no major announcements planned.” More photos are planned to be released throughout the day though, so stay tuned for more news.