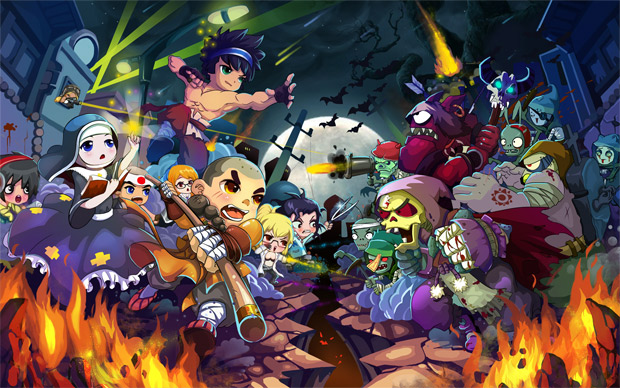 Zomber Squad has entered its open beta stage the past February 23th. The latest title from Omprus is a free-to-play action MMO that features a post-apocalyptic world occupied by zombies. The story line in this gaming piece is very simple, as in every zombie themed product, a mysterious virus turns people into zombies, the mutation spread quickly and the human race faces extinction. But that’s not about to happen, because you and a thousand more players, nominated by Omprus as “humanity’s last hope”, will form powerful anti-zombie squads and recover what has been lost.

Zomber Squad presents a very common gameplay system; it conjures the city building mechanism with real time battles. What’s peculiar in this title is the interface and display that somehow masks other functions, making them look new when they’re actually quite old. The city in this game is composed by flash buildings, a jeep, an underground passage, a post mail and paths for other player’s cities, additionally your squad members and building employees will be walking around your city, making it seem alive and different. But is it so? In other MMO’s of this genre, you can find buildings in traditional displays; mobility ways, portals and gates are common; people walking around, well that’s probably a new visual dynamic feature but besides the random minor presents that your workers drop from time to time, it’s merely just that, a visual feature. The graphics are probably the most unique part of the game; Zomber Squad has a very particular modern cartoonish visual, making the battling system much more tolerable for younger ages. 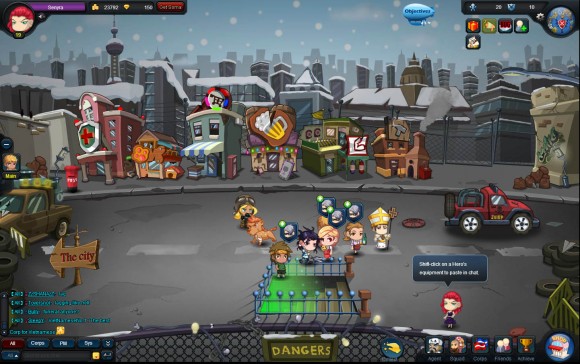 The buildings in Zomber Squad work as menu icons, except they’re animated and you get the sensation of entering and leaving a real space, this makes the game look way more exciting than it really is. But if you look the other way around, you need to click many more times to do the exact same thing you do in other games. There’s actually one single building, the Asylum, to upgrade other buildings, innovation at its best. So, if you wish to upgrade any building, you’ll need to enter the Asylum, click on the upgrade table, choose the building to upgrade, close that panel and click on the door to leave the Asylum. In Zomber Squad, the difficulty of accomplishing any task is unnecessarily high. It becomes even more hopeless when you analyze the inside of each building, they’re full of objects but only one or two have a real function, everything else is pure decoration.

At the game’s beginning don’t get surprised with the little functions and buildings, you’ll need to go through the in game guide and level up to unlock new features.

Each zomber squad can have a maximum of three characters, the composition has to be wisely chosen or the squad won’t defeat many zombies. Characters have a maximum of two skills and of course, normal attacks. Each squad members has a job/class and restricted weapons, however the armor and jewelry equipment can be shared between roles. The unusual class system is notorious, forget the traditional warrior, mage and archer roles, in Zomber Squad you have hairstylers, nurses and monks. Firing members is a possibility; you can replace squad members at any time but note that when you purchase a new fighter, he/she will be level one. If you add the new recruit to your high level squad mates, the result shouldn’t be pleasant, unless you patrol lower level zones. Transferring experience points between characters is probably the best option when leveling up a new mate. You can have a fourth member, your pet, which needs regular feeding in order to obey you and regular injections to level up. When it comes to character customization, you can change your pet’s name and decide its evolution process. 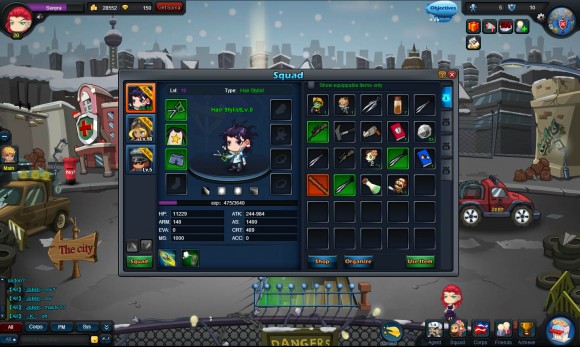 To start environmental battles, you ride your jeep and choose a battling spot, as you succeed in battle, you’ll be able to unlock new areas and maps. To prove you’re strong enough for a certain zone, you need to do a manual battle in real time, managing your squad member’s movement, attacks and skills against zombies that come out randomly from any possible direction. If you’re successful, you’ll be able to patrol (auto-fight) that same area. Fights can be prolonged at higher level, since kiting and strategy is necessary. Nevertheless, the battle system is very repetitive and tedious, with only six skills per battle, there’s not much you can do but moving around, avoiding to be hit and waiting for your skills to refresh. The player-versus-player system, the Arena, works in similar patterns, though there are several battling modes.

The achievement system presents a section for nearly every feature in game; some achievements unlock titles that can be activated. 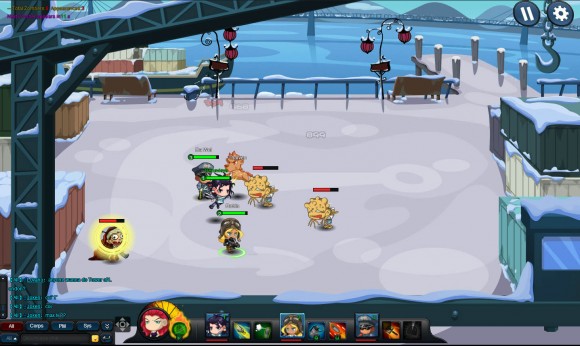 The game has a high lag rate, the loading screens between actions and maps take a while to complete as well. Overall, there are not many activities to do in this virtual world, battling against environmental creatures is very conditioned as you need energy points to do so, once you’ve depleted this field, you’re pretty much done for the day. Doing dungeons requires a team, which makes you extremely dependent on other players. There’s no real quest system, there’s a task accomplishment structure that is done through updating and doing certain tasks. And the only true thing that you can do, fighting zombies, is quite incomplete and unreliable. I mean it’s fine to simplify things but having only two skills per character? A pet that can’t be controlled and three characters per squad? I think that’s beyond simplifying things.