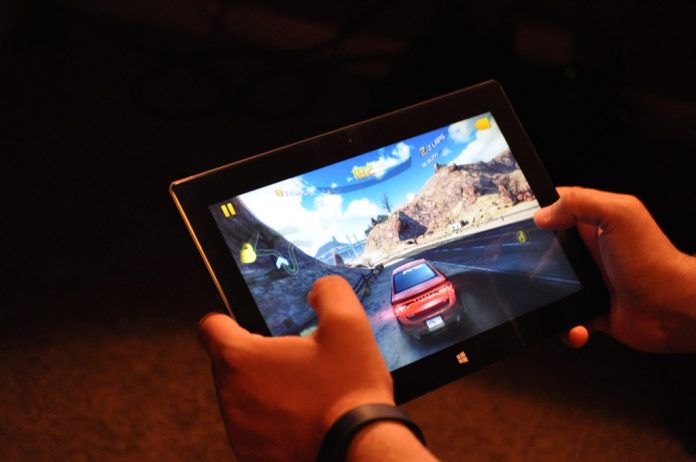 One of the most popular genres of mobile gaming is racing. With multiple games with multiple different ways to play, sometimes the market is a bit too flooded for some people to decide. I personally I have 3 different racing games on my iPad right now. Today, we’re going to be looking at two of the most popular racing games of 2013: EA’s Real Racing 3 and Gameloft’s Asphalt 8: Airborne. We’ll look at the pros and con’s of each app to determine which app is for you. Keep in mind both of these apps are free, so we’ll just be looking at gameplay.

Real Racing 3 was EA’s top racing game this past year. One of the more realistic racing games on mobile devices, this game has players racing on real life racks from around the world, unlocking some of the hottest race cars and real world models. While players race against some computer racers, EA has introduced a great new concept in Real Racing 3. Using something called Time-Shifted Multiplayer, players can race real people from their Facebook or from around the world. Using previous times from that player, the game generates an AI controlled racer based on that player’s performance, making the game much more realistic.

On the other end of the racing game spectrum is Asphalt 8: Airborne. Part of the hit Asphalt Heat series, Airborne takes the series to new heights, literally. I have written a review of this game before, giving it 5 stars. While this game includes real life locations and cars, that is where the similarities to Real Racing 3 ends. Players fly through city streets at high speeds, going off ramps to earn more nitro and taking out other players to secure the top spot. With interesting game modes like Infected and Knockdown, this game always keeps it fresh.

This game is not for those looking for a realistic racing game. Asphalt 8 is made for high octane racing with intense action. While this game does have some minor issues, it is over all a good racing game for some pick up and play action.

So out of Real Racing 3 and Asphalt 8: Airborne, which game is better? Well for the realistic racing fan, Real Racing 3. For the adrenaline junkie, Asphalt 8. For fans of racing games in general, both games are great. I highly recommend both games for a quick race before a meeting or just to kill time. From Real Racing 3′s Time-Shifted Multiplayer to Asphalt 8’s high flying stunts, looks like both games are here to stay on the App Store.

Feel like I should have mentioned another game? Think I missed a point? Let me know in the comments!