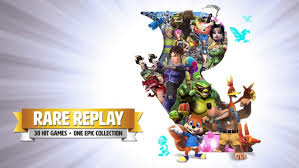 Rare Replay has stormed to the top of the UK All Formats Chart, and in turn has become the first Xbox One exclusive game to reach the top of the charts (Titanfall got released with a PC version).

The 30-game compilation also marks the first number one for Rare since Banjo- Kazooie managed the feat on the N64 back in 1998. The third and final first for the title this week is that it is the first time since Wii Fit Plus back in 2009 that a budget-priced title reached number one, according to Chart Track.

No other new releases mean that Rare Replay had little competition, as last weeks’ number one LEGO Jurassic World suffered a sales drop of 21% as it slides down to second. Batman: Arkham Knight suffers a similar drop, with it down to third this week.

The Elder Scrolls Online rides the wave of last weeks’ promotions to climb to fourth place, as Grand Theft Auto V falls back down to fifth.

Rory McIlroy’s PGA Tour has suffered a big drop since its chart-topping performance two weeks ago, and finds itself down four places to eighth.

F1 2015 is down to ninth as the Top 10 is rounded off by the Xbox Edition of Minecraft.

No new releases next week means it will be down to Rare Replay to try and hold onto its crown for another week.