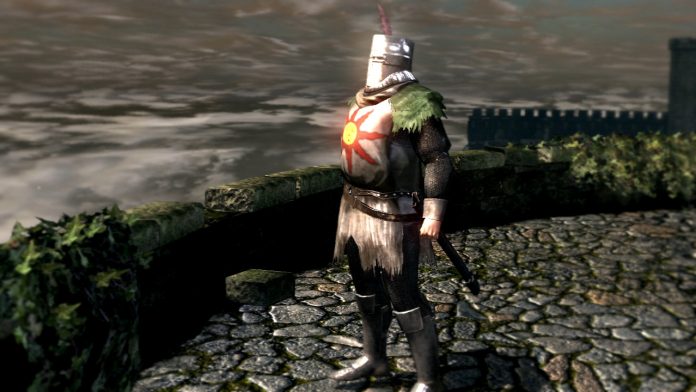 I am a massive fan of Dark Souls. There, I said it. It is a game that resonated with me so little at first, but after overcoming all of the hardships it offered, it slowly crept up from the bottom to the top of my list of best games ever conceived. It is an engrossingly grotesque and unique experience that has depressing and oftentimes macabre undertones, and though it is punishing and unforgiving, I love every moment of it.

From Software took cues from games of old, but it is about time that some other games take cues from Dark Souls. 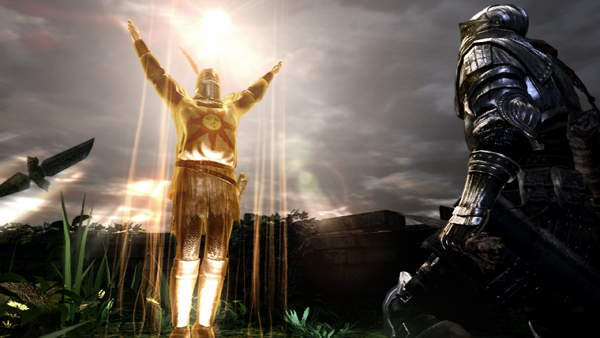 5. Variety is the spice of life

The games industry has grown substantially since it’s inception. Studios have grown by large numbers, games are selling more, have gigantic budgets, and have become more mainstream in the last decade. All of this coupled with technology has opened the doors for us to get deeper, more rewarding experiences out of games. What used to be simple high-score gathering has become entire towns and countries mapped out in real time for our traversing pleasure. While this is all fantastic for us, it is not the norm. Most games seem to clock in between six and fourteen hours – with the exception being RPGs that are significantly longer – and generally offer nothing but fluff replayability.

Take a look at a game like Dead Space for example. It has a campaign that can be conquered in under ten hours, and offers nothing except collectables and increased difficulty levels for variety. While the game has several weapons, none of them are substantial enough to argue playing through the game again to experiment. For another example, think about a game like Tales of Xillia. It is a massive, sprawling world filled with side quests to take part in and bosses to kill. It isn’t, however, worth replaying a second time. You could argue that playing through as Milla instead of Jude might offer a little variety, and while you’d be correct, it is not varied enough to justify a 60 hour grind through an RPG of nearly endless dialogue.

Dark Souls on the other hand, offers so much variety and replayability that it might feel insurmountable to even attempt it. Do you want to play a heavy tank class with a greatsword? a mage who uses rapiers and sorcery? a pyromancer dressed like a dragon that throws and spits fire and uses axes? a naked, shield-wielding barbarian that wears a hat so big that you can’t even see what’s in front of you? All of this is possible. It is also possible in other games, however, Dark Souls, has such punishing gameplay and intricate design, that going from something as seemingly unimportant as heavy to medium armour can have experience-breaking repercussions; Just experimenting with your build can make or break certain bosses or areas for you. 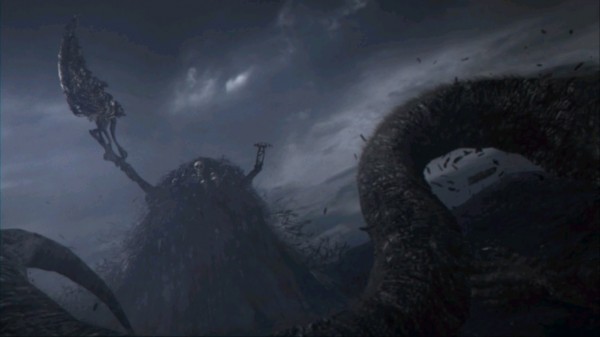 When Dark Souls and even Demon’s Souls came out, they were both criticized for their storytelling. People suggested that the story is basic in design and offers little to no insight into what you are doing and why. While all of this is true at face value, there is still much to behold in more classic and under-appreciated ways. For example, did you know that the Picasa (the little blue snake-haired enemies in The Dukes Archives), are actually women that were captured by Seath’s assistants, the Channellers, and brutally experimented on to further Seath’s research? Or that The Four Kings together ruled over New Londo, until a primordial serpent offered them the art of lifedrain?

There are little tidbits of information given throughout Dark Souls via in-game item descriptions and dialogue with random NPCs that any player might skip or ignore, resulting in the game appearing to be devoid of any actual lore and proper storyline. This is the exact opposite case. Dark Souls has an immense wealth of lore to be had, but it must be found, not listened to or watched via hours and hours of dialogue and exposition. Some games beat you over the head with unrelenting cutscenes, and in some cases, offer more cutscenes than actual gameplay. While this isn’t a bad thing, as games like Metal Gear Solid could be told no other way, there is a lesson to be learned in the phrase ‘less is more’. I am constantly fascinated by all of the bizarre lore Dark Souls has to offer, and I find it more intriguing than most games that provide nothing but constant exposition. 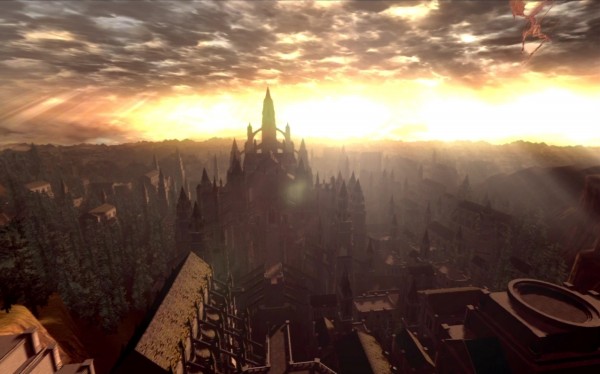 Many games that come out now leave nothing in terms of learning and problem solving to the player. It’s almost as if they think people wouldn’t understand their games unless they teach you how to function in this world and guide you from point to point, beginning to end. You will be walking through each level, being shown exactly where to upgrade your weapons and armour, level up, save, and how to get to every single objective you have. There are literally mini-maps that detail every piece of the world, with dozens of markers and waypoints just to make sure the player will not feel lost for even a second.

Dark Souls makes you find your own way, and it gives you almost nothing to go on. From the moment you start up, you’re taught how to attack and defend yourself, but the only actual advice you’re given in terms of where to go, is that you must ring two bells of awakening. One up high, and one down low. How do you ring these bells? where are they located exactly and how do you get to them? How do you properly prepare for the encounters you will most definitely face? Can you upgrade your armour and weapons? How do you do it and what is the most effective path to take? None of this is answered in any concrete way. Instead, From Software makes you use your own brain-power and skills of deduction and assessment, to properly navigate and prepare for each encounter and area you will stumble upon.

There is an immense satisfaction in figuring something out on your own, without having a mini-map telling you exactly where to go and at what point in time. This idea that you have to figure the game out on your own is made even more apparent when you discover some of the more subtle features like Covenants. You will not be told what each covenant offers, where each one can be accessed, the conditions for joining, and the repercussions of abandoning the covenants. They can actually play a large role in Dark Souls, but many people will go through the entire game without having seen all of them. 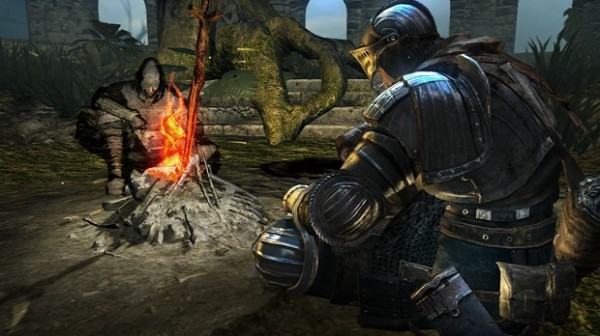 How many games have you played where you are gunning or slashing your way through hordes of enemies, just to have yourself killed and promptly resurrected only mere seconds or minutes before dying? Almost every modern game that exists currently offers some sort of checkpoint system that is gracious in its design, and this is a problem. Too often games get flak for having “bad” checkpoint systems in place, and the consumers by and large want their games to be cake walks, or at least the latest trends suggest.

Dark Souls doesn’t conform to any of this nonsense, and in fact, makes you crave every single checkpoint you will or will not receive. There are stretches of game where you will feel hopelessly lost, inadequate, underpowered, isolated, and utterly scared in some areas, and Dark Souls embraces and feeds on every single emotion that could overcome you.

From Software made a brilliant decision to limit your healing by giving you only five estus flasks, with a bonus five if you use precious humanity. You will crawl and lumber through desolate castles, grimy tunnels, and beautiful landscapes begging the game for a checkpoint, only to walk right past it without knowing, or be forced into an intense boss fight with only few precious flasks left. This is almost never replicated in other games, and it truly is a shame, since one single area in Dark Souls can be more satisfying or draining than entire games. 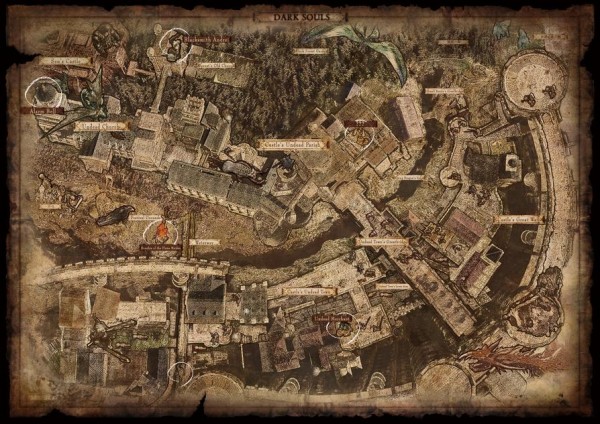 1. Interconnected worlds are a joy to behold

One thing that blows my mind every time I put my Dark Souls disc in, is that I’m constantly finding new ways to traverse the world and reconnect with areas that I have been to previously. Every single solitary area in Lordran that isn’t pasted to the background in an obviously out-of-reach spot can be accessed by at least one route. There are areas you will mindlessly walk past without thinking, and it will later become an essential shortcut that leads you to a masterful maze of traps, or a lower section of a location you have been traversing for hours. Some areas in particular have multiple ways to get to them; Darkroot Garden being a prime example.

Not only do areas have multiple routes, but you will conquer an area to find that it has now opened up two or more entirely separate areas for you to explore. Blighttown offers you The Great Hollow, Valley of Drakes, Demon Ruins, and The Depths; each of which have their own sub-areas or hidden secrets to find. It’s truly baffling how they even managed to pull off such an intricate world, but with a myriad of games offering linear pathways and endless corridor marching, it’s easy to forget how much more interesting a world with such intricate design can be.