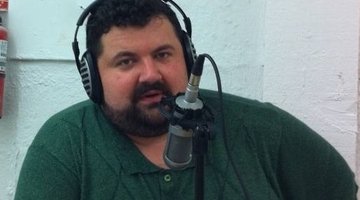 This past week the video game media lost one if it’s best. Giant Bomb co-founder and editor Ryan Davis passed away at age 34. A powerful personality in front of a camera and in person, Ryan will always be remembered for his infectious charisma as well as his professionalism and class. If you aren’t familiar with Ryan Davis, it is well worth looking back at his content both at Giant Bomb and GameSpot before that.

The news of his sudden passing is still shocking to many, even those who never met him personally. As someone who watched his work for many years, I can say it hit me in a not insignificant way. I can say without a doubt that he is part of the reason I’m at this website in the first place, and an inspiration for me to enter the industry in general. Many people were similarly attached to Ryan because of his pure charisma in leading podcasts, webshows and interviews. His absolutely infectious attitude came through no matter what situation he was in, from a casual show on GiantBomb to the full on E3 coverage, whenever he was on air you knew it, and it was great. As a person who just loved having fun, and didn’t take anything, including himself, too seriously, it is very hard to watch or listen to anything of his and not jump on board.

With the passing of Ryan Davis, we’ve all lost one of the greatest presences in not just video game media, but media in general. His importance and influence can be seen all over the place, not just as a person, but as one of the co-founders of Giant Bomb. He was one of the first personalities to really look analytically at video games, but also just enjoy them for the joy they brought, rather then look at is just a business. He wanted games to be fun and enjoyable, and wanted every one and every game to be on the same level.

Ryan Davis was recently married this last weekend, so there can be solace in the fact that he had surely one of the happiest weeks of his life recently. Surely losing such a person in an industry such as this is sad, but for all he brought we should look back on his life and contributions with smiles. As someone who clearly lived every moment to the fullest, I’m sure it’s what he would want. Certainly, our deepest condolences and thoughts go out to his friends, family, and colleagues.