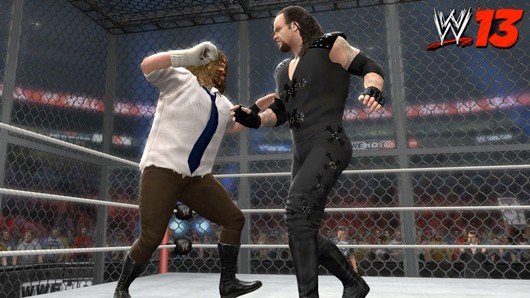 As the fall approaches, and as a result a wave of video games, we begin to see advertising for the games that will release prior to the holidays. Both current and next gen games are being pushed more heavily to draw in those early shoppers (less than 110 more days, everyone!) to pick up this product or that. This year, however, I am noticing a small difference: I’m actively aware that there is a new WWE game coming in October, and, for the first time in my life I want to play it. So I got to thinking a bit.

Last year, I was aware of WWE 13, a game based on a sport I pay zero attention to. I knew it was coming sometime, as annual sports games do, and I knew it was yet another Yukes developed wrestling experience. Outside of my own research into video games, however, advertising on the product seemed to miss me completely. The game turned out fine, it seems, but it was also cursed with a THQ publishing deal. There is a reason the company went bankrupt, after all, despite releasing some very good games in recent years. Not to imply that it was the sole reason, of course, but from the entire WWE series to Darksiders to even the first few Saints Row games to an extent, some very well made products fell largely by the wayside as far as mainstream advertising is concerned. It’s no secret that getting the information on the game, or product in general, out to the masses is nothing but beneficial to selling. There’s a reason advertising firms make money hand over fist for these types of things.

The difference this year is obvious, the WWE property is now owned published by 2K games, and looking retrospectively at the previous year, the game itself seems largely the same. Still Yukes developed, still the same game engine. However, under the 2K brand, Visual Concepts will be involved in development. The biggest changes come, as I can see, in marketing and presentation. Right off the bat, looking at the cover art, the art style present in other 2K Sports games pops right out. In a series that is reiterated on yearly, there has to be some form of consistency, which WWE lacked under THQ, to maintain a series image, whether good or bad. Away from that, the clean and modern design that 2K Sports uses for its games is not only associated with greatness in the sports genre (NBA 2K) but it also just looks sharp.

The art style they maintain not only markets itself to a point, but 2K also has a pretty good history, at least recently, of marketing in general. Granted, they do have plenty of games that have sold themselves for a long long time, namely anything Rockstar makes, but they’ve also built a few franchises from practically nothing to mainstream hype. Games like Borderlands and Bioshock came virtually out of nowhere, and are now very much mainstream successes. Again, these particular games have experiences that warrant such success, but they still know how to convey that to onlookers and casual players. Even now, the way they are still pushing NBA 2K, despite increasing sales numbers year after year, shows their commitment and skill in the field.

Obviously, this is an extremely small case study, and neither of these companies rest solely at the bottom and top of the spectrum respectively, but in a time where more and more casual players will pick up an interesting looking game that has a good trailer on TV or on a website, companies should look to invest more into their marketing department. While the internet is increasingly accessible, there is still a large part of the consumers that will not spend time visiting websites like this one to learn about what’s coming up, no matter the clout that a company has. Even Nintendo, a company that many people love, especially after the family-friendly Wii, cannot sell their new system on name alone. If they could find a way to successfully market the Wii U, the lack of games for it would sort itself out over time. It’s situations like these where the oldest adage in business strikes hard: “You have to spend money to make money.” Spend money adequately conveying the message of your game to the masses, and the games that deserve it just might sell.