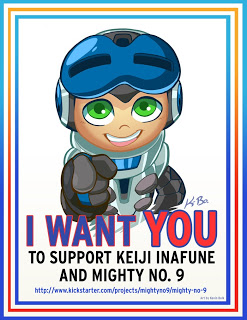 After fan feedback and a video thanking their fans, Keiji Inafune and Comcept have decided to lower the stretch goals for Might No. 9’s console versions. Originally the stretch goal for the Xbox 360, PS3, and Wii versions was $2,500,000. Inafune and his team have marked it down to $2,200,000, a $300,000 difference.

The Kickstarter project currently sits at over $1,860,000 in funding from over 32,000 backers. The game still has a whopping 23 days to go until the Kickstarter shuts down. Comcept and Inafune described Mighty No. 9 as a spiritual successor to Megaman. A series Inafune originally created with Capcom over 2 decades ago. Apparently Inafune was repeatedly turned downed by Capcom with offers for a new Megaman game. It looks as though his ideas were spread out towards Might No. 9.

The game was able to achieve most of its stretch goals. The game will now include, two more stages, a Mac and Linux version, new game plus mode, turbo mode, and a making-of documentary. The only stretch goal left is the console versions.

Inafune also recently expressed his displeasure with the Japanese game industry, claiming that it has only gotten worse since the last time he commented on it. He expressed his pleasure with Kickstarter and believes that this is a platform that might just save Japanese development. He encouraged more and more Japanese indie developers to use Kickstarter to fund their projects instead of wasting their time with big publishers that will only deny their efforts.

Mighty No. 9 is set for a Spring 2015 release date. You can back his project here.