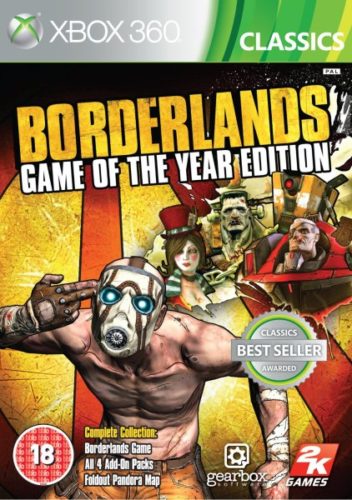 About a week ago, Gearbox and 2K Games announced that Borderlands 2 will get a game of the year edition. Slated for an October 8th release in North America (October 11th for the rest of the world), Borderlands 2 GoTY will have over $100 USD of content, including DLC, skin packs and more. Here’s the list straight from the press release:

The only thing missing from this is the recent Ultimate Vault Hunter Upgrade Pack 2, which was released Tuesday. Also not included are the Headhunter Pack and the Digistruck Peak Challenge. The Headhunter Pack, which includes fan-favorite T.K. Baha, will be released sometime around Halloween, according to Kotaku. Further details have not been announced about this and the Digistruck Peak Challenge.
In other Borderlands 2 news, vault hunters on the go will be pleased to hear that the game will be released for PS Vita in 2014. No details where given about release date or DLC. Gearbox said they where working with developer Iron Galaxy to bring the game to the mobile platform. Sony is said to be publishing the game. More details about this, the Headhunter Pack and Digistruck Peak Challenge should hopefully be announced in the coming weeks, so stay tuned for more details.