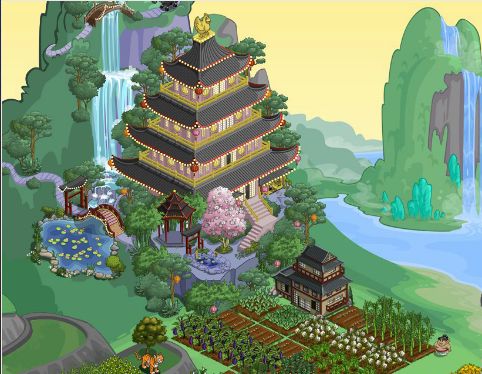 Rumors started a while ago, claiming that a 6th farm is in the work for FarmVille and today I am happy to share with you the first preview of that farm: Jade Falls is the name of the new farm that will come with a Japanese theme and many unique new features. There’s a short preview video below that I found on Zynga’s servers and you can check it out too, it’s very cool.

The FarmVille Jade Falls new far will challenge you to build the Mountain Palace and we’ll most likely have a lot of Dragons and Pandas as decorations and animals, among many other things.

It is unclear at the moment when will Jade Falls be released in FarmVille, but by the looks of it, the new farm is really close. And until we get it in the game, check out the teaser preview below. It looks amazing!

So, what do you think about Jade Falls?