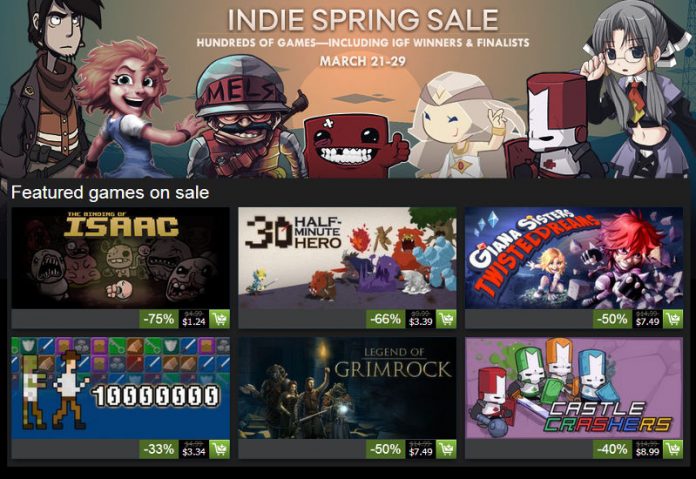 The sale features a whopping 1000 entries, with popular games such as FTL, Hotline Miami, 30 Minute Hero, Limbo and Super Meat Boy all up for grabs for discounts ranging from 10% to a ludicrous 75% off. The sale also boats some of my personal favourite titles, such as Audiosurf, a block collecting game that uses your music library to build levels and To the Moon, hands down the most emotional game I’ve ever played.

Special placement goes to games in two categories however. The first is made up of winners and finalists from the 2005, 2006 and 2007 Independent Game Festivals an event that is intended to recognise the very best in indie game design. The selection of renowned titles is made up Gish, Braid, Weird Worlds: Return to Infinite Space, Castle Crashers, Darwinia, Everday Shooter and Samarost 2.

The second category is made up of games that are being shown at PAX East this weekend. The full catalog features the games Organ Trail: Director’s Cut, Edge, Tales From Space: Mutant Blobs Attack, They Bleed Pixels, Slam Bot Scrappers, Containment: The Zombie Puzzler, Go Home Dinosaurs, Awesomenauts, Droid Assault, The Wonderful End of the World, Guns of Icarus Online, Capsized and Snapshot.

These are just a few of the more stand out games, and no doubt with a selection as large as this one, there are sure to be a great many gems ripe for the picking.

The Indie Spring Sale will run until the 29th of March.