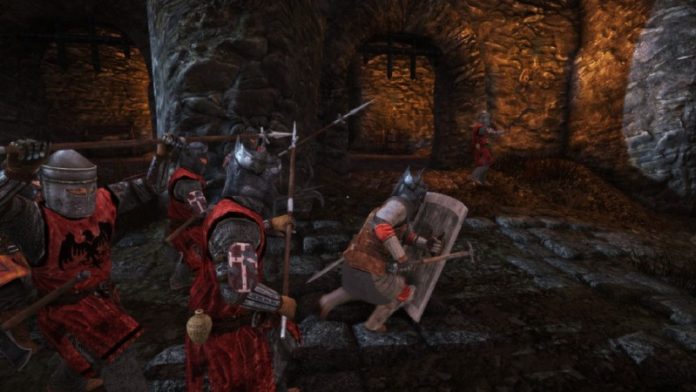 War is upon us! You have been beckoned to don thine sword, shield, and helm! In the name of your King, put down these aggressors!

But first thing’s first; it really helps to have an idea of the roles you will be playing as a soldier of either the good and just Agathian army, or of the unholy Mason Order. I will guide you through the strengths, weaknesses, and tactics on a general level, and look briefly at the stats that make up the weapons and characters, so you can adjust your play strategies and achieve maximum impact. 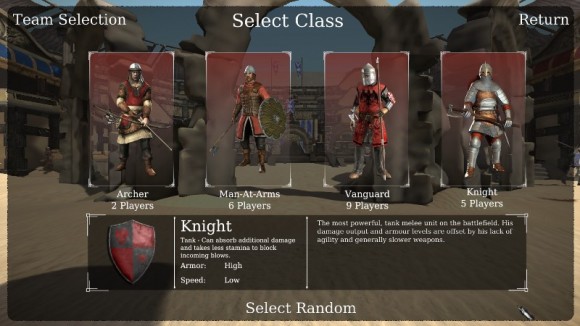 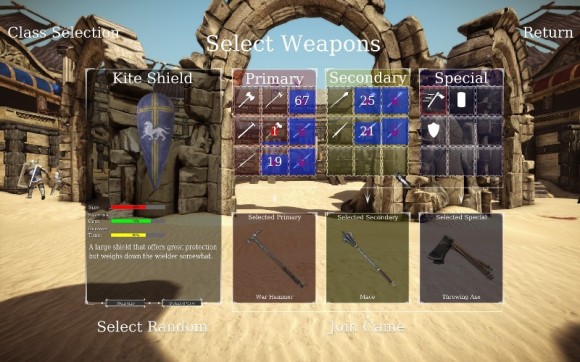 When you pick a class, you make a decision about how you’re going to play the game – whether it is the heavy hitter or the lightfoot. Do not merely play the style; be the style. Let it flow through you, and become you.
Each class of weapon, with exception to throwables, have unlockable extras with tweaked stats, made to meet a player’s comfort zones of damage and timing.
Both of these factors come together and make up the system of strengths and weaknesses.
One should note, though, that advantages are not set in the classes themselves, such as in Team Fortress 2, where each can dominate some while being weak against others; every type of unit has a chance to take on another with the right moves and strategies, setting the focus on the playstyle itself. The things you, the player, put into the style when you play: such as aggression, or response time, or stubbornness, are what decide whom wipes the floor with whom. A slow but heavy hitter is just as deadly as a quick stinger, and the deciding factor being in how these opponents counter each others’ moves. You can fake people out with feints, block, parry, and queue up your hits with combos. The only Rock Paper Scissors factor is you.

Hack and Slashers generally need to accomplish one main thing: make the player feel like their hacks and slashes are really connecting the way hacks and slashes are supposed to. Swings and impact feedback are integral in fulfilling the experience of a medieval combat simulator. The hit system of a competitive game like Chivalry: Medieval Warfare cannot be stingy in its details, and man oh man does Torn Banner deliver a a hell of a hitting stuff experience. Factors from the swing arc, to the distance of the swing’s tip, to the power, to the speed of the swing itself are all counted. Even blocking and defending is not as simple as a button press, but you need to actually aim your shield or you parrying weapon INTO the arc of the opponent’s swing for it to connect and deflect. This provides fair game against heavily defensive players turtling behind a shield, thinking themselves untouchable. You’re able to poke around shields and hit unprotected areas, as you damn well should! Hell, you can sometimes even duck under a swing! It’s crazy!
Meticulous attention has clearly been put into the system of dealing damage, as well as in balancing the effectiveness of the Chivalry arsenal, despite the common “OP” whiners you will encounter in matches. For all three variants of each weapon type, stats are never boosted in some aspect without taking away from another, and it caters to specialities while keeping the playing field even. Armour types and health are also used as key components to balance, trading speed and mobility for fortitude, and segregation of certain weapon types between unit classes enrich the strategic worth of a player’s preferred style.
The selection of swing types not only differ in direction, but damage and often also effectiveness. Stabs generally reach the furthest, while overhead swings often hit the hardest, and horizontal swings deal average weapon damage with the added benefit of its long arc which can glide through multiple enemies.
The hitboxes in this game are well-defined, with three general areas of damage dealing: highest at the head, mid-ranged on the upper body, and lowest on the legs and feet. With ranged weapons, these hitboxes will feel absolutely tiny, and will take plenty of practice to land those hits regularly. However, do not get discouraged; archery is only difficult because it’s too powerful to be made easy. 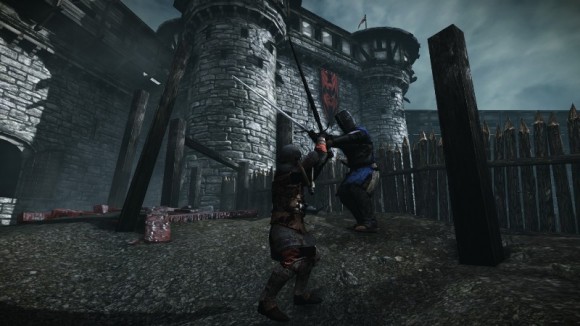 When you’re bored of combat, you can always spice up the battle experience by trying to land kills using the environment, like kicking opponents into bladed walls, spike pits, off of ledges and into the sea, throwing fire upon them, mowing them down with a stationary ballista or even stomp them into the ground with catapults. Boobytraps have also been recently implemented in a newly added map, where you can roll a giant boulder down the hill, or try to lure someone into a tripwire that sets loose two giant hanging logs to crash together and squeeze an enemy’s brains out of their ears like play doh. These trick kills are truly some of the most gratifying and rewarding kills in the game.

With ample game modes with different goals like Free-For-All, Team Objectives, Team Deathmatch, Last Team Standing, King of the Hill, Capture the Flag, and Duels – you can get your carnage on however you like: coordinating with others, practicing your 1v1s, or jumping into an all-out fracas.
There even exist silly modes Low Gravity servers or voluntary All-Slinger games just for the giggles.

In games like Chivalry – games of cooperation and competition – voice commands play a pretty integral role in communicating without taking breaks from the battle, for rarely does one have the time to type out orders or responses to their teammates. The list of the voice menu features warnings like “Behind us!” or “Archers!”, orders such as “Follow me!” and “HEEEELP”, even extra lulzy audibles like antagonizing laughter and hysterical taunts.

But back to game mode strategy —

Free-For-All – By all means, experiment as much as you want while playing FFA. This is the best gamemode with which to practice your crafts, since battle is constantly ongoing, and there is no running to the front line after every respawn. But a strategy-savvy player will want to pick their favourite class that can change targets fast, or strike multiple enemies at once. For me, my dudes of choice are the Man-At-Arms and the Vanguard for high kill, low death games.

Team Objectives – This gamemode should not be about your KDR; focus on the objective and cooperating with your team in order to accomplish it. Too often are there those who are easily distracted by a potential kill instead of rushing the point with the team, and need to be set right. You can yell at them through chat to get focused and run with the packs, use a voice command to remind them of the objective and to have them stick close to others, or get on microphone at bark orders. Take initiative, reader. T’is always better to shine a light than to curse the darkness. Oh yeah, and use whatever class with which you’re comfortable.

Team Deathmatch – Here, you want to survive as long as you can, while helping your compatriots stay alive as well, so that they can continue helping you survive, and so on. This gamemode is a war of attrition and outlasting the enemy forces. Unlike the other gamemodes which center around ‘kill moar’, this one is more about ‘die less’.

Last Team Standing – Loners don’t last long in this gamemode. With no mid-battle respawns, you better make as many lives count as you can, and that means sticking close. The good thing about this mode is that players naturally form wolfpacks. Every team should have AT LEAST ONE SHIELD-wielding knight to protect both himself and any squishy archers or retreating wounded behind him.

King of the Hill – Not too complicated, control the platform and keep enemies off. Sometimes, having a teammate run around outside of the point area will weed away the easily distracted, allowing the mount-holders to focus on the enemy trying to take it from them.

Capture the Flag – Wolfpacks. Form wolfpacks. A flag running squad and a flag defender squad will basically cover everything needed to win. Do not tolerate straggling battles; try to bring everyone back on point into their squads.

Duels – Here, you practice your one-on-one combat focus, timing, and aim. You’ve even the luxury of trying to master any dirty little tricks like ducking or luring the opponent into a boobytrap or kicking them into an environmental hazard.

Someone once told me that Chivalry was not a team-centered game because it didn’t have the word “Team” in it. I wanted to slap that fool, because neither does Counter-Strike or DOTA, and because we were playing the Last Team Standing game mode which does indeed contain the golden word. It cannot be stressed enough that objectives and survival always have greater odds when you aren’t alone, so make friends and attack as one.

To conclude, Chivalry: Medieval Warfare is a spectacular addition to the competitive multiplayer gaming world, and a total worthwhile investment for those looking for something more from the First Person Action genre. Its only shortfalls are the bugs that occur when the server menu breaks or when you need to close the game to join a friend from your list. Oh, and lag, of course.
But don’t expect to see much actual chivalry in matches. You will be ganked, stabbed from behind, set on fire, and shot up like a pin cushion by archers if you dare stand still.
The learning curve to the combat system is quite steep, and took me quite some time to get my average lifespan to more than seventeen seconds, but experimenting with the camera perspectives (default keybind: ‘P’) helped immensely.

Now go! And may you smite down your enemies with the power of holy retribution!