Last week, a Kickstarter project went up with the goal of raising 900 dollars to fund a little girl’s trip to an RPG making camp. With the help of mother Susan Wilson, Mackenzie Wilson purportedly set up the page in order to prove to her brothers that she was capable of undertaking the RPG camp and making a game. At first glance it appears to be an innocent cause, but more recent developments have thrown the project into an unsavoury light.
A thread on NeoGAF has found that despite the Kickstarter page’s implication that Mckenzie had no other way of getting to the camp and proving her two “mean” older brothers wrong, the little girl in fact comes from a fairly successful family, with mother Susan White considered one of the most powerful female entrepreneurs of 2009. While this is perfectly okay by Kickstarter’s rules, the fact that there’s no mention of this on the Kickstarter page gives off a dodgy vibe. This is emphasised by Susan’s statement that Mackenzie was “already going to camp” before the page was started, making the premise of the page false.
The addition of an absolutely ludicrous 10, 000 dollar pledge reward (Over 10 times the actual goal) suggests that at this point the page has become more about cashing in than anything else. This feel is heightened by the amount of merchandise that is being offered as a pledge goal, suggesting that the Kickstarter is in part about selling a large array of T-Shirts, Hoodies, and rather inappropriately for a 9 year old’s dream, beer koozies. 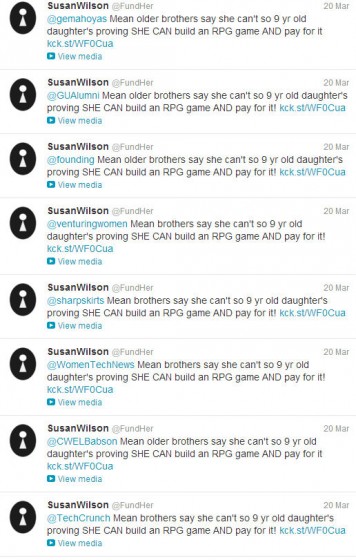 On top of this, the project is in violation of several Kickstarter rules. As seen in the image above, Susan White has been spamming Twitter in order to raise awareness for her campaign, going against a Kickstarter rule stating that “Sending unsolicited @-replies on Twitter” is not allowed. The funding of the girl’s tuition is also barred by the “no fund my life” rule. Despite this, the campaign has managed to garner over 21 thousand dollars. I’ve reached out to Kickstarter to confirm whether or not they’re aware of the project’s violations.