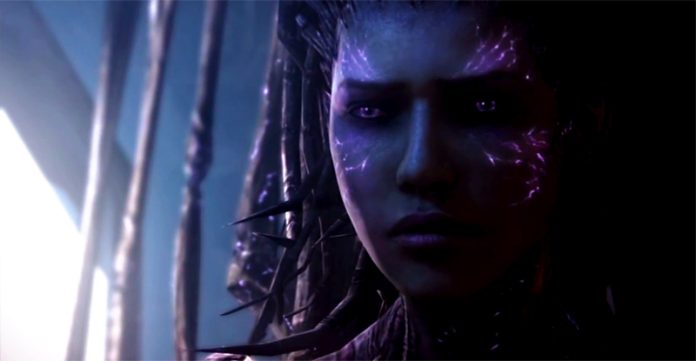 The edge between longstanding enemies has become very blurry with the recent event in Heart of the Swarm. Before the expansion’s release, I’ve discussed the future of two of the main characters of the StarCraft franchise, Sarah Kerrigan and Jim Raynor. In StarCraft 2, players were certain of Jim’s feelings, he clearly showed he never stopped believing in Kerrigan, however a new Sarah Kerrigan had just been presented as the Queen of Blades, a powerful and fearless character that seemed everything but human. In Heart of the Swarm, it’s more than obvious that both characters feel for each other regardless all the events preventing them from being physically together. If there were any doubts about Kerrigan’s humanity and feelings for Jim, then after the first StarCraft 2 expansion, there should be none. The Queen of Blades has to face several tests and in all of them she shows compassion for the human race and she proves that Jim is important in her existence.

The story may seem vulgar and emotional but if we analyze events closer, we can conclude that Jim is not a mere love interest, without him Kerrigan would probably decide to remain human and the future of every race would be condemned to extinction. What basically made her freely choose to become the queen of the swarm again was the thought of Jim’s death, which boosted her thirst for revenge against Arcturus Mengsk. More than ever, his death became a priority, as so Kerrigan reunites a whole race in order to defeat a single man but she doesn’t do it alone, Jim Raynor showed himself a very loyal and faithful ally.

In StarCraft 2, it’s Jim who saves Kerrigan from hostile human forces by bringing her fragile self to a secret facility. In Heart of the Swarm, it’s Kerrigan who risks everything to free Jim, after thinking he was dead: “I had to get you out”. Jim clearly disapproves of her decision to lead the Zerg once again but he is not able to fulfill his human soldier role and kill the enemy’s queen.

Both characters may be top enemies but their humanity goes pass that, they’re able to protect each other while fighting for a better future. Deep inside, both know their love is physically impossible but that doesn’t seem to stop them from believing in one another. After all, they know that every life form in the galaxy depends on their very actions.

In the last moments of Heart of the Swarm, we can see an emotional Kerrigan saying goodbye: “Thank you Jim, for everything.” But a curious aspect arises, Kerrigan leaves the Korhal planet with her swarm and realizes that now, her true enemy lies silently in deep space, meaning that humanity shouldn’t need to worry much about this beastly enemy. A perfect ending in need for a second expansion: Legacy of the Void.