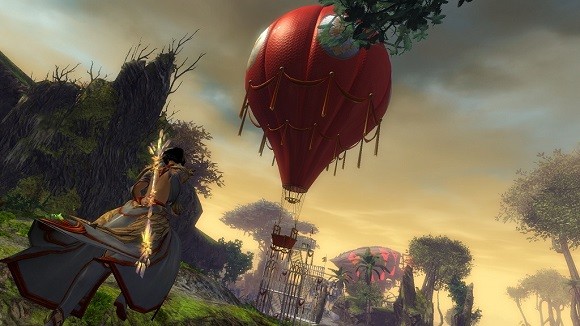 NCSOFT and ArenaNet launched today the latest update for Guild Wars 2, Queen’s Jubilee. This package, already live, introduces new gameplay content to the fantasy world of Tyria, including new features, events and rewards. Queen’s Jubilee is a dedicated update to the human race, where “players will celebrate 10 years of Queen Jennah’s rule by opting to take a hot air balloon to Divinity’s Reach, the capital of the human nation of Kryta, and home to the opening ceremony”, explained NCSOFT.

With the Queen’s Jubilee update, players will experience several new gaming experiences. In the action side, players are now able to challenge each other in a solo death match battlefield in the PvP Solo Arena. Accounts will have a more organized and secure wallet accessible by every character in the same account, where players can keep all their currencies together – badges of honor, coins, dungeon tokens, fractal relics, gems, glory, guild commendations, karma and laurels. A new reward system is now live too, every day when players finish a different path in any instance, they’ll be able to receive additional rewards. Furthermore, there are four dedicated special events to Queen’s Jubilee, in those activities players can join a ceremony and fight unique bosses for glory, fashion and fortune, as NCSOFT announced:

Hot Air Balloons: Queen Jennah’s court has sent hot air balloons to transport the inhabitants of Tyria to the celebration. Players can find the hot air balloons in the open world and hop on for a fun, quick and stylish ride to the party.
The Opening Ceremony: Players can attend the dedication of the Crown Pavilion, a new gladiatorial arena the queen has commissioned for the celebration, and watch its inaugural contest.
Enter the Crown Pavilion: Players will be tested in this new mini-zone that feature mighty representations of humanity’s enemies. Representing various cities of Tyria, players can be named champion of a nation and gain access to unique reward vendors.
Fight in the Queen’s Gauntlet: In single combat, players can attempt to defeat increasingly difficult challenges against unique bosses. Taking risks with special gambit conditions will earn more prestigious rewards.

Even though some activities started yesterday, most events begin today, check the full list in this dedicated page made by the company.