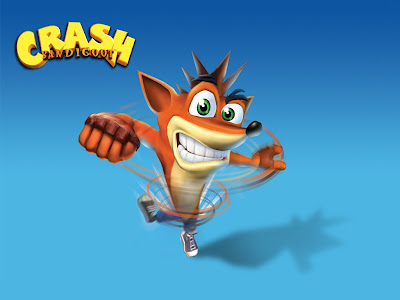 All signs point to Sony buying the Crash Bandicoot IP from Activision. In a compelling Reddit post by cocobandicoot, several interesting things have been discovered that might just point to a PS4 Crash game.

Crash Bandicoot was first created by Sony owned studio Naughty Dog back in the 90s. The developer has worked on four titles before moving on to the Jak and Daxter series for the PS2. The Crash Bandicoot franchise however was never owned by Sony, but by Universal. It was sold off to Activision in the early 2000s. The last game in the series was Crash: Mind Over Mutant, developed by Radical Games and released for the Xbox 360, PS2, Wii, and Nintendo DS.

One of the most compelling things cocobandicoot has discovered is an image of Crash grabbed from Sony’s recent Playstation 4 launch commercial. The picture shows a silhouette of Crash on a white circular sign with a red outline, an arrow is pointing up to a yellow diamond, which is heavily reminiscent of the old Sony Computer Entertainment logo.

Crash was a prominent figure for Sony, and acted as a mascot for the company and the first Playstation console. A debut on the PS4 will definitely be a huge deal for Playstation fans.

We’ll update with any incoming news.