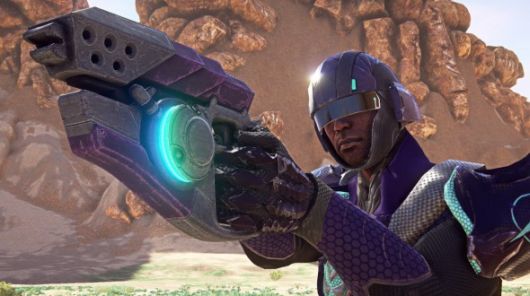 Even if someone had the opportunity to go back in time and let Sony Online Entertainment (SOE) know that the free-to-play model would come to be the commercial success that it is today, that individual would still be met with skepticism. One reason for this disbelief would be for the mere implication that the financial risk they were taking would receive such critical acclaim and a dedicated fan base. Two, for the gall someone would have in stating that they had indeed time-travelled.

The title in question, of course, is Planetside: an online multiplayer first-person-shooter (FPS) that involves tactical, fast-paced gameplay in the wake of players from every corner of the globe. The series has garnered a devoted following including individuals who seem incredibly excited for the upcoming release of the title’s successor, Planetside 2. Hundreds of fansites devoted to delivering the latest news, pictures, videos, and content concerning the title’s public beta and eventual release are emerging on a regular basis.

SOE created a product that hardcore shooter fans the world over have been clamoring for.

Having announced Planetside 2 a year prior at the Sony Fan Faire, the developer/publisher has gone on to reveal the existence of a beta available to devoted fans of the series. As of now, fans are able to visit the title’s official site and sign up for a chance to acquire beta keys which allow for the title’s level design, servers, and overall gameplay to be test driven by the most hardcore Planetside enthusiasts.

Furthermore, of the information released about the product so far, it has become readily apparent that fans can expect all that they loved from the original online FPS and more including the Terran Republic, Vanu Sovereignty, and New Conglomerate factions. Factions being a major part of gameplay as the three aforementioned groups encourage players to employ unique tactics depending on the one they’ve selected. In addition, fledgling and veteran players alike can expect a fully-realized class system that was not present in the original. This new addition is likely being implemented as an evolution of the inventory system found in the original Planetside. The class system will include jobs common to most FPS’s such as Medics and Engineers whose occupational descriptions have been made familiar to FPS enthusiasts for many years, however, the inclusion of the Mechanized Assault Exo-Suit (otherwise abbreviated as M.A.X) will empower specific players with a powerful armored robotic suit that will undoubtedly pack a serious punch to the truly inexperienced.

As time approaches the launch of the title, hype sees no end in sight. It is quite evident that SOE may find that this new release will experience an incredible increase in the user-base that its predecessor could not have mustered.

SOE has proved that the free-to-play model is not reserved for titles such as League of Legends but, rather, an accepted business construct with a few critics, of course!