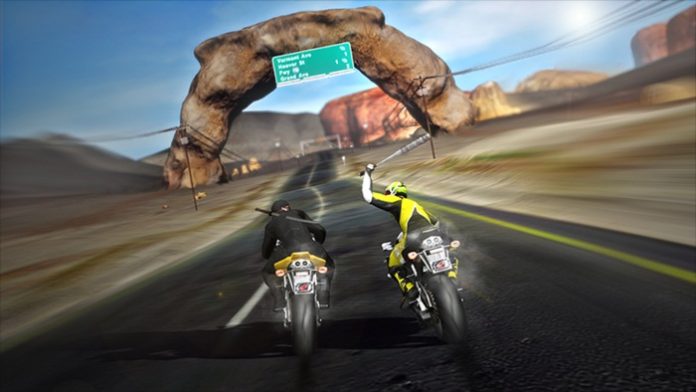 The team over at DarkSeas Games has been hard at work on what can be described as the “spiritual successor” to the Road Rash series. To make this happen, the developer started a Kickstarter fund to help reach their financial goals. As of earlier today – they finished the race.

The team has surpassed the $160,000 goal that they initially set. This now guarantees that a version of the game will see the light of day on PC, Mac, Linux and Wii U. Yes, you did read that right, Wii U. Stretch goals have been incorporated as well. The funded has just recently surpassed $164,000. With about 40 hours to go, if they team raises $178,000 a XBLA version will be released as well. Additionally, if they reach $198,000, DarkSeas Games will create a version specifically to cater to the Oculus Rift.

A trailer for the title has been released on YouTube showcasing exactly what the developers are hoping to accomplish in their take on the motorcycle racing/combat genre.

The game looks fun, and the inspiration from Road Rash is blatant to say the least. But that’s a good thing. The game suggests a narrative driven story will be incorporated:

“Road Redemption takes place in a nightmare version of the American midwest. You play a recently-paroled felon.  After 8 years in federal prison,  you must work your way back up from the bottom of your old motorcycle club. As you rise in the ranks, it becomes clear that not all of your brothers are acting in the best interests of the club, and may even be responsible for your incarceration. You must play a pivotal role in the resulting power struggle, with multiple outcomes depending on your actions. Eventually, you can lead your own faction and fight to control territory and drug distribution routes in a war for survival and supremacy.”

A variety of different bikes, courses and weapons will be at your disposal. Even pistols, which could drastically change the weapon balancing. However DarkSeas Games clearly states that “gun combat is a minor (emphasis theirs) part of the game, as ammo is a scarce resource in the world of Road Redemption.  There’s no such thing as auto-aim, so when you do make that shot, it’s 100% your doing.” At least it sounds like it’ll be difficult to get a head-shot going over a 100 mph.

You can view the Kickstarter campaign here. If you’re interested in helping out, act fast. There’s less than two days until the time limit runs its course.