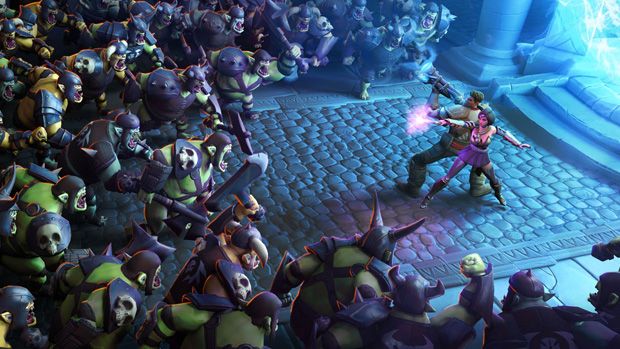 Robot Entertainment, spawned from a number of key members of Ensemble Studios, is a team devoted to bringing the world of strategy to a larger audience. Who hasn’t had the opportunity to learn the ropes of the genre from the Age of Empires series, right? They continue this tried-and-true formula, however, this time in the realm of tower defense. Orcs Must Die 2, from the minds of some of the greatest strategy game developers in the industry comes a game that brings players into an idealized world fit for gun-toting, war-mage wanna-bees the world over.

For those of you unfamiliar with the franchise, the Orcs Must Die series pits players against waves of orcs (who would have thought?) who spawn from rifts that have been cleverly distributed throughout a multitude of levels which gamers will have the opportunity of traversing in light of the imminent threat. The goal, as the title of the game cleverly suggests, is to put these darn beasts out of their misery. Through the utilization of traps, weapons, and magic players ensue carnage on leagues of enemy types ranging from fast, slow, and lumbering goons to dumb, weapon-wielding foes alike who, for some reason, have taken quite a fancy for the over world and are set on entering it via brightly lit doors.  Most maps take place in subterranean settings and consist of players utilizing mine carts and the like to render their enemies asunder. This makes for a title that encourages players to take heed of the environment as well – a feature that sets it apart from its other tower defense counterparts.

Veterans of the series will expect much of the same elements present in the first game with the addition of more levels, magical trinkets and the like. Consequently, this emphasis on gameplay results in an incredibly linear venture with a story that provides players with a generic cast of characters whose personalities have been seen in every chick flick since the dawn of time. For example, one of the initial characters that players will have the opportunity to use upon their first boot of the game is a war-mage whose masculine, simple-minded persona makes him akin to every dumb jock in the book.

Which book exactly? ‘Popular Media’s Big Book of Character Cliches’ – an interesting novella detailing the development of modern-day, popular media’s nomenclature in light of progressive development and the like. If the previous statement’s sarcasm was not evident enough for even the brightest bulbs staring at this article, then I apologize for my lack of blatancy. 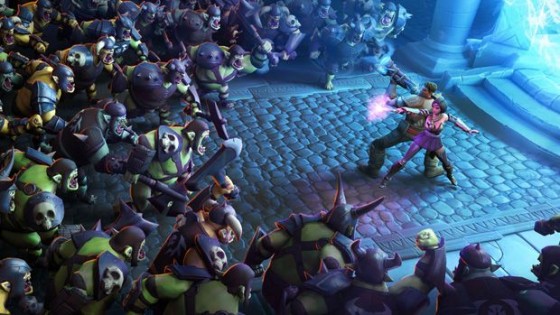 In addition, the princess in the tale does not stray too far from her predetermined role of being ‘a strong-willed monarch facing danger that she would have handled on her own, however, due to the joviality associated with the male lead she has chosen to accommodate the possibility of one day having a romantic relationship with him through their combined efforts in combat.’ A bit of a mouthful, huh?

Furthermore, it must be mentioned that the title features cooperative play which makes for incredibly enjoyable feats of murder (did I say that out loud?). Murdering orcs that is!

However, before you make the decision to leap head first into Orcs Must Die 2 you must be informed that having played the initial installment in the series is of no requirement whatsoever. Sure you’ll be more knowledgeable on linear plot cues that have spanned the gap between the two titles but that won’t change your experience much because, provided you have made the decision to buy the game, you will be preoccupied with the task of killing hordes of ugly green, blue, and sometimes yellow rift-spawned goons. This is something that I believe Robot Entertainment did purposely to provide a title that is not intimidating to players in any way. This allows new customers of the series to have the opportunity to simply have fun – enjoying a title that should be credited for its ease of accessibility, simple yet entertaining game mechanics and stock, however, personable characters whose player models match the characteristics which the developer has succeeded in delivering to players.

Orcs Must Die 2 enables even a child (though it is not recommended) to pick it up and have the same dexterity as a grizzled tower-defense player would in the same situation. With characters that evoke relatable emotions, a user interface (UI) that needs no explanation other than the five or six boxes of text that are bound to meet your eyes upon your first play through, and, finally, an emphasis on this interesting thing called ‘fun’ will bring you running back for more time and time again.