Krater is an upcoming top down role playing game from Swedish developers Fatshark, scheduled for release sometime in the second quarter of 2012. Although just two screenshots from the game have been released publicly, Krater has already managed to draw a lot of attention, looking like a top post-apocalyptic RPG game that will probably make us think about the original Fallout games.

Fatshark themselves compare Krater with classic old-school RTS such as Syndicate combined with modern RPG-action and top down tactical gameplay. All in all, a mix that sounds extremely interesting.

Below you can check out a complete Q&A session with Krater producer Robert Bäckström who reveals a lot of exciting information about the upcoming game:

Could you tell us a little about the release schedule of the game?
Krater is a title that we plan to keep alive for a long time. All tools, the game world and its content is designed with this in mind. The paid content of the first year of the game is divided into three major campaigns (the main release and two DLC´s) along with a number of smaller content packs with characters and items.

In addition of the paid content the game will see a number of updates to extend multiplayer (coop and PvP) support as well a updates and additions to all ingame content. We will not force people to pay for the extra content in order to play – it should be an option if you like the main story and want to experience more of that or if you like to be the one with the coolest looking gear in multiplayer.

Where did you get the idea having three characters simultaneously and a big roster to choose from? And is it fun to allow the player characters to die?
We have several inspirational sources for this. We initially wanted the players to design their team in the same way as you try to find the best and most optimized combinations of forces when you setup your army in table top games such as Warhammer Fantasy Battles. 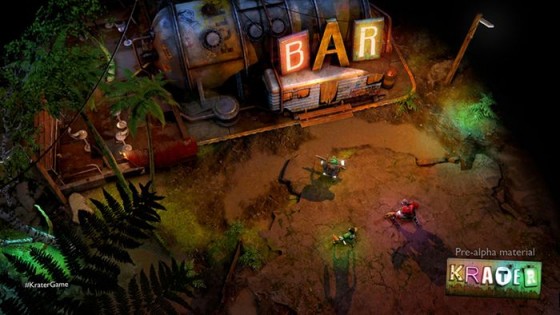 We also wanted the characters to evolve in all directions (not only upwards in the skill trees) and come to life through the course of the game.

One thing led to another – if you have consequences such as death you will need to adapt the game mechanics for this. Loosing it all without tools to cope with the loss is not good game design while no risk at all removes the meaning of rewards in a sense.

How will character progression work?
All characters and abilities range from common to, in the initial release, rare which decides how many slots they have available for upgrades and abilities.

Upgrades increase you stats which affect your ability usage, hit points and damage output. Abilities are special skills that you perform with you character in addition to your normal attacks.

New characters are found in the world, received as rewards from quests or purchased as DLC´s.

How does the fact that Krater takes place in a dark future in Sweden affect the art direction and feel of the game?
We initially talked about putting the story somewhere in Europe and never really considered Sweden as a setting. But somewhere early in our design process we got to hear, through the musician Christian Gabel, about a Swedish post-apocalyptic movie set in the small town of Karlstad. He had come across a number of concepts and a manuscript for the film from the early 80’s which was canned before any filming had been done.

One of the concepts depicted a gigantic crater big enough for a society to be built inside it – an iconic setting that immediately got our attention. Shortly thereafter it was decided that we should put the story in Sweden and build the myth about Krater city.

The colorful setting of the world steams from two things. On thing is that vibrant colors in post-apo settings felt like a somewhat different take on the genre art style, which normally settle for a desert with lots of subtle earth colors.. The other thing is the fact that Sweden or at least Stockholm during the winter vey much looks like the classic post-apo world where everything comes in shades of white and grey. We felt the need to create a world that stood out from the dull winter landscape outside our office windows, an odd and amusing place that tickles your imagination. 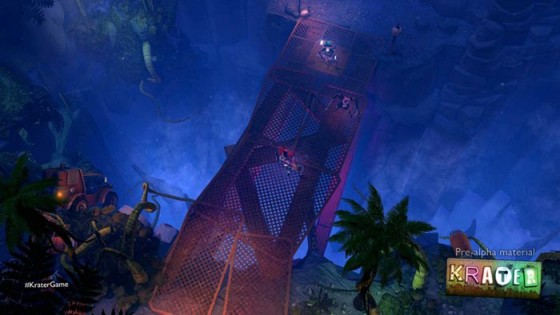 What can you say about the music, will it be original tracks?
It turned out that Christian Gabel had started to work on how the soundtrack for the canned movie that inspired the game might have sounded like. But since there was no movie to use the soundtrack in we suggested that we should use the music in the game instead which turned out to be a brilliant idea. All tracks are originally created and adapted for the game.

In conjunction with the release of Krater we will work together with a number of contributors and release a pretty lavish soundtrack as homage to the film. That release includes a booklet with the original cancept art and all Gabels tracks.

How long do you think it will take players to finish Krater if they only pursue the main quest? And what can you tell us about the scope of the game?
The main release will contain 200+ quests. Out of these I would say the 25% is main story quests.

It is very difficult to estimate the playthrough time because if can be defined in so many ways. Is it to unveil all corners of the map? Or to play all the quests? Conquer all the duungeons? How many times, some of the dungeons will look totally different every time you visit them. Maximize your characters? Another daunting task since there is a large number of combinations to try out.

Tell us more about the multiplayer support in Krater.
The initial release will contain customized 2 player coop missions. We aim to expand this to 4 player coop at a later stage. During 2012 we will also see a PvP update with both arena fighting and faction warfare.

Character progression from coop blends seamlessly with the single player game and vice versa. You will be able to bring your single player team to play a coop mission with your buddies and anything you can put your hands on, you are allowed to keep,

How does crafting work?
You can create items for base materials but also upgrade existing items. You can get new items by, buying them, looting them, breakdown equipment, completing quests or by crafting them from other components.

New abilities are created by components you find from loot. These components are crafted into ability containers (where a rare container have more slots available than a common container). Any component can be combined in the container. You can for instance use two stuns and one damage component in a three slot container to create an ability with a minor damage output and a high degree of stun. Or you can use a cool down reducer instead of the damage component to further specialize the ability.

The character class decides how these abilities are delivered (the Bruiser can for instance use his cleave attack to affect several opponents with the effects his cleave attack is made of – in the above case stun and damage). The class also receive bonuses to components that are connected to you class – a medikus utilizes a heal ability better than when the damage dealer uses the same ability.

As I said, it sounds extremely interesting, including the way of handling character classes and the 2 player co-op modes.