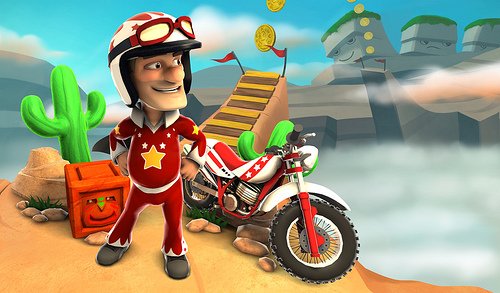 Joe Danger is making his way to pastures new once again, after a post on the Playstation Blog from Hello Games confirmed that Joe Danger and its sequel, Joe Danger 2: The Movie will be making their way to PS Vita in 2014.

Joe Danger was a side-scroller that mixed in both platforming and racing aspects as you raced to complete objectives against the clock.

The side-scroller started life back in 2010 when it was released on Playstation Network, before crossing to Xbox Live Arcade, getting a multiplatform sequel and going over to PC, and finally an iOS version which came out earlier this year.

Sean Murray, Managing Director of Hello Games stated just how important it was the game runs to the best of its abilities: “It’s super, super important to us that our games run really smoothly. Like, 60 FPS smoothly. There’s nothing like the super-slick movement and sense of responsiveness of a really well-made game. “

He also noted how, like the PS3, using all of the control inputs will be an important part of the conversion: “All Vita’s inputs, from its touchscreen and rear Touch Pad to its dual analogue sticks, are essential. We aiming for Joe on Vita to play at least as well as it does on PS3!”

It will be interesting to see how the Touch Pad from the iOS version comes into play, especially since it seems they will be trying to mix that with the DualShock controls it was originally made for back in 2010.

Joe Danger and Joe Danger 2: The Movie will be released on PS Vita in 2014.