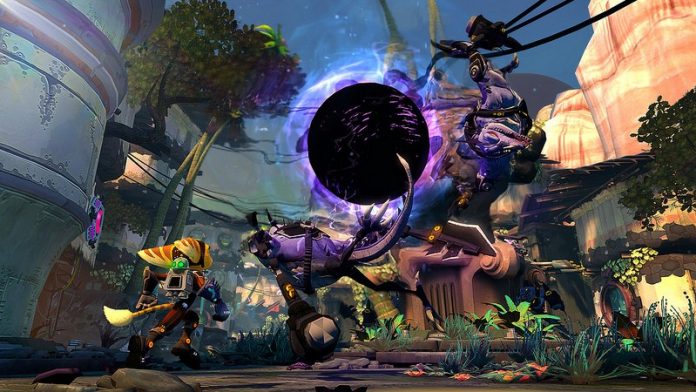 Insomniac fans, I am sure you are well aware of the return of our favourite Lombax and his metal ‘lunchbox’ companion in the newest installment to the Ratchet and Clank series: Into the Nexus, due for release this November. For those who have missed the exciting news, here is the official YouTube trailer to get your gaming thumbs tingling for a bit of the single player madness coming our way:

‘Ratchet and Clank: Into the Nexus’ is a ‘Lom-blast’ from the past as the single player adventure continues as an epilogue to the ‘Ratchet and Clank Future’ trilogy. Insomniac takes what they (and no doubt many fans) believe to be a much needed revisit to the fun, humorous, somewhat emotional and yet thoroughly addictive personal story of our loveable protagonists – Ratchet and Clank. Such information was listed on the PlayStation website.

The story begins with the failed transportation of two very dangerous twin criminals, Vendra and Neftin Prog to a detention center, resulting in our galactic heroes finding themselves abandoned at the edge of the sector. However, this isn’t the only disaster looming for our heroes as they later encounter a threat to the galaxy that leave them contemplating what is most important. Seriously, where would this pair be without a matter of life or death hanging over a galaxy?

In this latest installment to the many adventures of Ratchet and Clank we will not only be having some great encounters with some of our favourite characters from past games such as: Cronk, Zephyr, Talywn and even quirky Captain Quark, but we can also see the return of ‘Ratchet and Clank 2’s’ villains, Thugs-4-less. Yes, these purple brutes find themselves making a reappearance looking very ‘graphed-up’ whilst still maintaining their renowned unintelligent, reptilian appearance that had so many fans in fits of laughter back in the day.

Alongside old friends and enemies is a huge new arsenal of weaponry you will be itching your ‘squishy’ hands on. Two of the new weapons can be acknowledged in the above trailer for ‘Into the Nexus’. One of which is the ‘Winterizer’ which specializes in turning enemies into snowmen that can be smashed. Sound ‘Ratchet and Clank-y’ enough for you? Another notable weapon addition is the ‘Repulsor’. This weapon works alongside the ‘zero-gravity’ theme of the game in which it works by suspending enemies in mid-air, leaving them vulnerable to attacks. Gold bolts will also be making a reappearance and no doubt alongside many other collectables to make this adventure just as enjoyable for multiple gaming audiences as it’s prior single-player installments.

So the real question is, will ‘Into the Nexus’ be less or more enjoyable given the style of play in the previous two Ratchet and Clank games: ‘Ratchet and Clank: All 4 one’ and ‘Ratchet and Clank: Q force (Full frontal assault)‘? According to fans, these past two multiplayer/ competitive installments have strayed from what we know as Ratchet and Clank and in doing so, built up a aching nostalgia for the past single player games. Insomniac claim to have ”…had a really amazing time expanding the universe of our intergalactic heroes” but despite this ”It feels like the time is right to revisit Ratchet’s personal story arc”.

Maybe it was Insomniac’s plan all along to give the widely loved single player adventures a rest in order to keep it’s magic but at the same time, give Insomniac a chance to push Ratchet and Clank into other markets. such as family orientated markets with 4 player ‘Ratchet and Clank: All 4 one’?

I personally wont deny that I will be happy to see the back of the multiplayer and competitive nonsense that the past two games brought to the series that made me the gamer I am today. What about you readers? Will you be happy to dive back into indulging in a great single player story or will you miss the new aspects ‘All 4 one’ and ‘Q force (full frontal assault)’ have brought to the series?

‘Ratchet and Clank: Into the Nexus’ will be available this coming November exclusively to Playstation 3, available in both retail stores and on the PSN store. Don’t miss out on this much awaited catch up with our favourite galactic heroes and be sure to get your ‘fanatical fingers’ on a copy as soon as you can, I know I will be doing just that.