Apparently my mind likes to imagine that Bon Jovi’s song “You give love a bad name” is somehow relevant to certain games, because I find myself singing the lyrics “shot through the heart…” every time I see a decent looking game with the words “gun” or “bullet” in its title. Needless to say, my mind managed to work its strange voodoo once again this morning when I heard that indie puzzler Gunpoint has as set release date of June 3rd and is already up for a discounted preorder on Steam.

Gunpoint is a stealth-based puzzle game in which you play as a spy who uses a variety of gadgets to enter a building and access a computer terminal with sensitive data on it. The primary mechanic of the game involves rewiring various electrical circuitry to manipulate the building’s mechanical devices so you can get the data without being spotted or killed. Among the gadgets at your disposal are “projectile trousers” that allow you to jump great distances and a “special trench coat” that prevents you from taking fall damage “for some reason”. Other gadgets include a device that allows you to wire guns as if they were electrical components; this could allow you to wire one guard’s gun to another’s, so when the first guard fires, it will activate the other guard’s gun shooting the first guard in the back 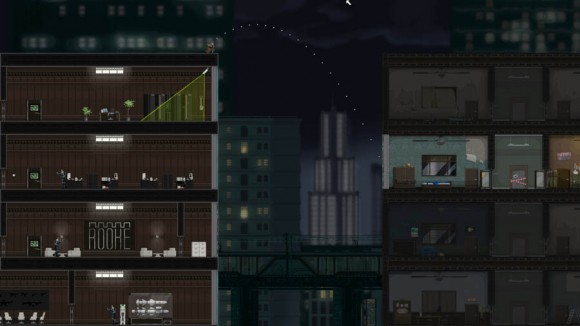 Gunpoint looks like some serious puzzling fun and a great way to test your logic and lateral thinking skills; there’s a reason it’s an IGF finalist. Gunpoint will release in approximately one week for $9.99, but you can get it for a dollar less if you purchase before June 10th; I know I will be.