As you probably heard already, Kristen Bell will make a return as Lucy Stillman in Assassin’s Creed II and she will play a bit bigger role in the sequel. Lucy, not Kristen. But that’s not the point of today’s article which, to be honest, only exists to let you watch the beautiful geeky blonde recording the lines for her character, wearing a skimpy outfit and making us wonder.

Of course, it’s not just the looks that make Kristen Bell so adorable. She is also considered by the entire world (and a few alien civilizations) as a real game geek and she certainly showed that she’s got skills to drive the geeks mad with her performances in Fanboys or Heroes. Or Gossip Girl, for those who watch such things…

Back to her and Assassin’s Creed II, here’s what she said about the great honor of being a voice actor in the sequel: “As an actress, it’s both challenging and rewarding to play a complex character with this great mysterious background. I’m very happy to be Lucy once more, and I look forward to fans discovering more about her – they will be pleasantly surprised.”

Until then, the only pleasant surprise I have for you is made of several pictures of her as Lucy and a couple of images with the “final product”. Enjoy! 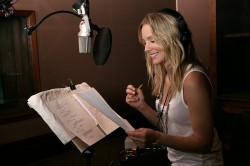 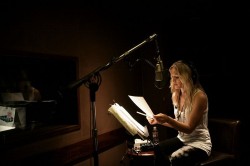 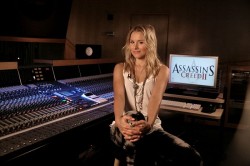 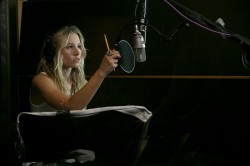