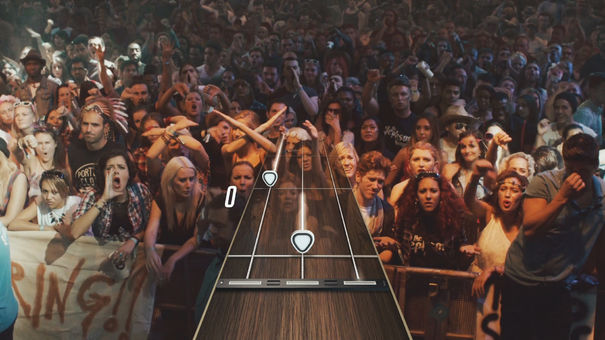 Activision has announced Guitar Hero Live for PS4, PS3, Xbox One, Xbox 360 and Wii U, with the game coming to certain mobile platforms at a later date. It is scheduled for release in fall 2015 and will be developed by FreeStyleGames, of DJ Hero 1 and 2.

Guitar Hero Live will feature two ways to play the game. The first is GH Live, which sees you play in a first-person perspective on-stage. It will provide a live-action experience of performing a gig with real-life bandmates and crowds. The atmosphere will change depending on how well you play as you move from small venues to festivals.

The other mode is GHTV, a playable 24-hour music network. It will allow players to perform with a continually-updated collection of official music videos across a variety of genres. You can choose between different channels and themes as well as selecting songs to play on-demand and battle your friends for a high score.

Also being introduced in Guitar Hero Live is a new, modernised, guitar controller with two rows of three buttons to better recreate the natural performance style of a guitarist. It also aims to help make the game more accessible for different skill levels.

“Guitar Hero is a franchise that so many people love. Figuring out how to bring it back with true breakthrough innovation has been years in the making, and a labor of love,” said Eric Hirshberg, CEO of Activision. “Guitar Hero Live lets people rock real crowds with real reactions. Our goal was literally to give people stage fright. And with GHTV, we have created the world’s first playable music video network. All of it is playable on consoles, or mobile devices. Guitar Hero is back and better than ever.”

The game will offer a variety of music genres to play as it attempts to take the approach of a modern music festival. Activision announced a number of acts appearing in the game, including The Black Keys, Fall Out Boy, My Chemical Romance, Gary Clark, Jr., Green Day, Ed Sheeran, The War on Drugs, The Killers, Skrillex, The Rolling Stones, The Lumineers, Carrie Underwood, Pierce the Veil and Blitz Kids. More will be announced at a later date.

The game and guitar bundle has been given a $99 price, with no UK pricing yet known.

What are your thoughts on Guitar Hero returning?