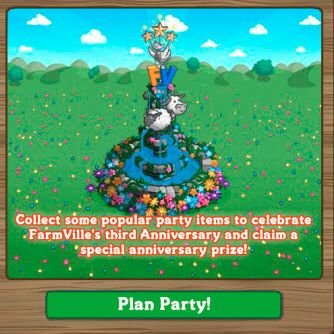 FarmVille is preparing for the 3rd anniversary and Zynga has quite a celebration prepared – and it includes some really amazing prizes for us. Of course, in order to fully participate to the 3rd Anniversary Party, you need to build the Anniversary Fountain, which is a process that spreads over 4 stages. I am here to tell you the requirements for the FarmVille Anniversary Party and the great rewards you can with during the Third anniversary in FarmVille!